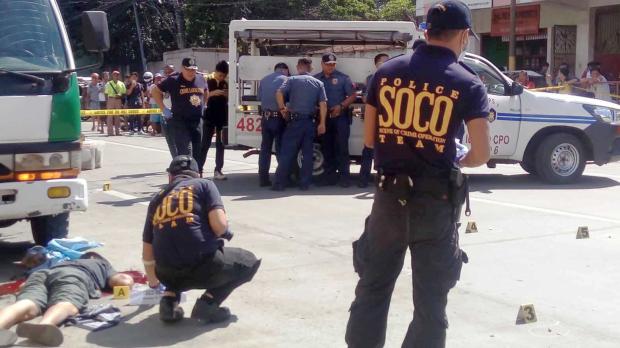 Members of the Scene of the Crime Operatives gather evidence at the crime scene, where the body of Nestor Piagola Jr., is lying facedown after being shot by men on a motorcycle on Saturday, Nov. 24, 2018. (Photo by JOEL FRANCO / Inquirer Visayas)

ILOILO CITY — A tricycle driver who had completed a drug rehabilitation program was killed by men riding in tandem on a motorcycle at 9:30 a.m. on Saturday in Barangay Rima-Rizal here.

According to police, Piagola was waiting for passengers when men on a black Yamaha Mio motorcycle peppered him with bullets.

Supt. Jonathan Pablito, chief of Station 1 of the Iloilo City Police Office, confirmed that Piagola was a “tokhang” surrenderer and a graduate of a rehabilitation program of the Philippine National Police.

The tricycle driver’s father, Nestor Piagola Sr., is serving his sentence at the New Bilibid Prison for a drug offense.

As to the motive for the killing, Pablito said: “We cannot say it’s drug-related deeper unless investigation is conducted. What I know is his father Nestor Sr. is in Muntinlupa. He was convicted of a crime related to RA 9165 [the Comprehensive Dangerous Drugs Act].”

“He is a good man,” a relative of the victim, who refused to be identified, told the INQUIRER in Hiligaynon. “As a matter of fact he finished his rehab.”

Piagola is the second person killed by a motorcycle-riding men in a week in this city.

Recovered at the crime scene were five empty shells, possibly from a .45-caliber pistol.

Piagola died on the spot with several gunshot wounds in his head and body.

Pablito is planning to request the city government and Land Transportation Office here to tighten their rules on motorcycles running without plate numbers.

He said would be hard to identify the perpetrators because they were using unregistered motorcycles.

“I will coordinate with the city and LTO to tighten the implementation of possible no plate no travel in the city,” Pablito said. “I am also contemplating to push that every motorcycles must be registered with the police so that it will be easy for us to find possible motorcycle used once its color, model and design is identified.”

He said, however, that this plan would face some opposition. /atm