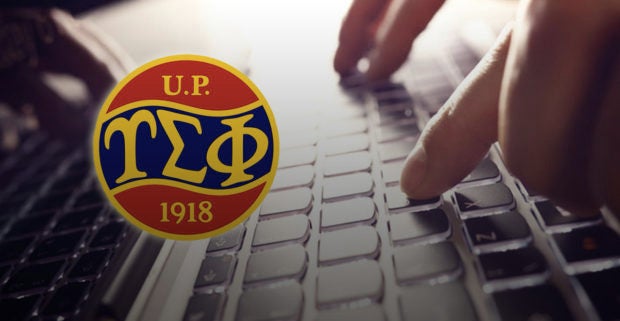 A University of the Philippines fraternity has come under fire after a group chat which allegedly belongs to its members was leaked online.

The messages have been linked with the fraternity Upsilon Sigma Phi, which has chapters in U.P. Diliman, U.P. Manila and U.P. Los Baños.

Excerpts of the Facebook chat circulated on Twitter on Nov. 21, though the person who leaked the group chat has not been identified. Some names were also tagged in the group chat.

Netizens, especially those from the U.P. community, have condemned the messages since these contained comments that are sexist, classist, violent and bigoted. Minorities such as women, the LGBTQ+ community, people of color, Muslims and the Lumad community are among those who were slurred in the chat.

In one portion of the leaked group chat, when one member shared a woman’s statement against strongman Ferdinand Marcos — himself an Upsilon member — the messages that came after insulted women and called them dumb.

Female politicians were also labeled as stupid, such as former president Cory Aquino, whose husband Ninoy Aquino was an Upsilonian, and Sen. Risa Hontiveros.

Sentiments such as women belonging only to the bedroom and kitchen, or that their mouths were only useful for blow jobs, were stated in the group chat.

Another part of the group chat saw members discussing how to publicly appear that they cared for women and the gay community. For instance, it was suggested that they would stage a rescue of a member belonging to LBGTQ+ organization UP Babaylan by hiring a fake attacker.

Other comments said that minorities such as Muslims and the Lumad or indigenous people deserved to be killed.

The members of the group chat also thought it laughable to ride a jeepney, saying that it was only for people who are poor or in need.

Individual members, such as UP Diliman student council chair Yael Toribio, Akbayan Youth chair Juan Carlo Tejano and UP Los Baños student council chair JJ Ilagan released statements via Facebook on Nov. 21, denouncing the group chat. They called for action against the members in the chat. Toribio said he filed a leave of absence from the frat. All statements have since been deleted as of writing.

UP Diliman student councilor Ian Serrano announced via Facebook on Thursday, Nov. 22, that he has resigned from the fraternity. “This is not me acting out of disdain of you, but of disillusionment from the culture we have. I feel powerless in changing the culture internally,” he said.

The UP Diliman student council condemned on Nov. 21 the altercation between Upsilon and the Alpha Phi Beta fraternity last Nov. 13 and 14, as well as the leaked messages which it attributed to Upsilon. It called for the identification of the frat members and their sanctioning.

Senseless acts that emerge from a culture of toxic masculinity can no longer be tolerated inside the university.The…

Posted by UP Diliman University Student Council on Wednesday, November 21, 2018

The UP Center for Women’s and Gender Studies released a statement on Thursday, Nov. 22, about the group chat but did not name Upsilon as the fraternity behind it. “The UPCWGS denounces the hegemonic masculinity that the exchanges typify,” it said. It also called on fraternities and organizations to adhere to the University’s humane values.

“Patriarchal attitudes and behavior that manifest themselves in slurs and overt acts not only against women, but also members of the LGBTQIA+ community, indigenous peoples and other marginalized sectors are deplorable and unacceptable wherever they occur, more so in the national university.”

The UP Diliman Gender Office also denounced on Thursday, Nov. 22, the “disgusting, misogynistic, myopic, and violent remarks” from the group chat. It demanded that Upsilon release a statement and for those behind the group chat to come forward and explain themselves.

Statement of the UP Diliman Gender Office on the Alleged Upsilon Online ConversationNovember 22, 2018The UP Diliman…

Posted by UP Diliman Gender Office on Wednesday, November 21, 2018

In a statement, the UP Portia Sorority said it “strongly condemns the violent and derogatory marks made by certain members of the Upsilon Sigma Phi fraternity against women and other marginalized groups.”

It also called for “the identification and apology of the members” involved in the chat and for the university administration to sanction fraternity members.

UP president: ‘I will not protect any fraternity brother who may be found culpable’

UP president Danilo Concepcion, himself an Upsilonian, issued a statement today, Nov. 23, where he spoke as the university president and as a member of Upsilon.

He described the posts as “reprehensible and totally unacceptable in our community.”

“Such flagrant misogyny has no place in a university dedicated to the highest ideals and the practice of gender equality and human rights,” he said.

“I will not protect any fraternity brother who may be found culpable of these kinds of offensive acts,” he promised. He said that an investigation will be held for the Nov. 13 and 14 brawls between Upsilon and the the Alpha Phi Beta fraternity. There is no mention if there will be an investigation for those involved in the group chat.

He has directed all chancellors to require organizations to undergo gender sensitivity training before accreditation or renewal is granted.

Upsilon: ‘A concerted effort to besmirch our reputation’

Upsilon released a statement today, Nov. 23, saying that the fraternity “strongly condemn[s] all acts of discrimination specially against these sectors,” pertaining to the various groups mentioned in the leaked group chat.

The fraternity said it has conducted an initial investigation and are coordinating with the Office of the Vice Chancellor for Student Affairs (OVSCA) on the matter.

However, it did not expressly take accountability for the leaked group chat, stating that the “unverified screenshots of the alleged conversation” is “unfortunately… being attributed to a few students who are members of the Upsilon Sigma Phi.”

Upsilon claims that the leak is “a concerted effort to besmirch the reputation of our Fraternity” in time for its centennial celebration last Nov. 18.

It also highlighted in its statement the group’s various work with minorities: “Our members have fought hand in hand with UP students for the rights of women, LGBTQIA+, Lumads, Muslims, and other oppressed sectors.”

Upsilon is celebrating its 100th year after being established in 1918. It was announced last October that President Rodrigo Duterte issued Proclamation Order No. 539 declaring 2018 as “Year for the celebration of the centennial anniversary of the Upsilon Sigma Phi” in light of the fraternity’s contributions to nation building.

The milestone has been marked with various events the past year, including a concert, a play, advocacy work and a centennial ball held last Nov. 18.