Group cites risks of plastic use in hospitals 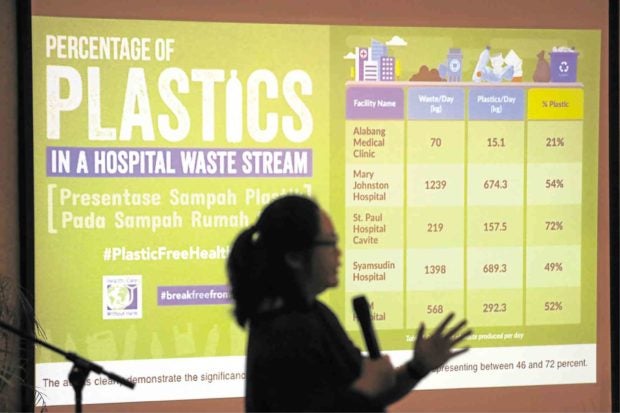 HARMFUL PLASTICS A health care advocate explains the risks to patients as hospitals continue to use harmful plastic products during a forum in Quezon City on Thursday. —NIÑO JESUS ORBETA

The unregulated use and disposal of plastics in products in hospitals pose health risks to patients, a group of health care advocates said on Thursday.

They called for the reduction and elimination of harmful plastics in health care to allow “sustainable management of plastics” in a hospital waste stream to help protect the public and the planet.

The group told a press briefing about the “shocking” reality of the growing problem of plastic use in hospitals.

It identified the top sources of plastic products in a health care setting, based on a study conducted at several hospitals in the country and in Indonesia.

“I myself was appalled by the findings. I never realized that we were creating a bigger problem with what was once thought of as a solution,” said Dr. Glenn Paraso, chief operating officer of Mary Johnston Hospital in Manila, one of the selected sites for the audit.

Paraso was referring to the results of the waste and brand audit in five hospitals—three in the Philippines and two in Indonesia—which showed that plastics in a hospital waste stream ranged from 49 to 72 percent.

The audit was conducted by Health Care Without Harm (HCWH), an international nongovernmental organization.

It found hospital waste that included sharp objects, such as used needles and syringes; “pharmaceutical waste” like expired and contaminated drugs; and “infectious waste,” including soiled dressings, blood and bacterial cultures, as well as regular food and plastic packaging waste.

HCWH said health care waste and byproducts could lead to sharps-inflicted injuries; toxic exposure to pharmaceutical products, such as antibiotics and cytotoxic drugs released into the surrounding environment, and to substances such as mercury or dioxins, during the handling or burning of health care waste.

People can also get exposed to chemical and radiation burns from disinfection, sterilization or waste treatment activities, while the current practice of medical waste incineration causes air pollution.

The study also found that unlabeled plastic items in hospitals reached up to 78 percent, which, it said, was “a big fail” for manufacturers.

“Without proper labeling of these plastics, their proper usage and even disposal can be inaccurate, leading to open dumping or waste incineration,” HCWH said.

The audit was conducted from July to September at Alabang Medical Clinic, Mary Johnston Hospital and St. Paul Hospital Cavite in the Philippines, and at Syamsudin Hospital and Universitas Gadjah Mada (UGM) Hospital in Indonesia.

The study also found that three companies—Nestlé, Danone and Monde Nissin—topped the producers of plastic waste, which it noted was consistent with previous waste audits.

Plastics make up one-third to half the nonfood health care waste, while “a significant proportion” of the medical plastic waste is the same “unnecessary and nonrecyclable” disposables, according to the study.

It also found that hospitals mostly recycle their intravenous (IV) and polyethylene terephthalate (PET) bottles and paper materials in an attempt to generate extra income and reduce health care waste.