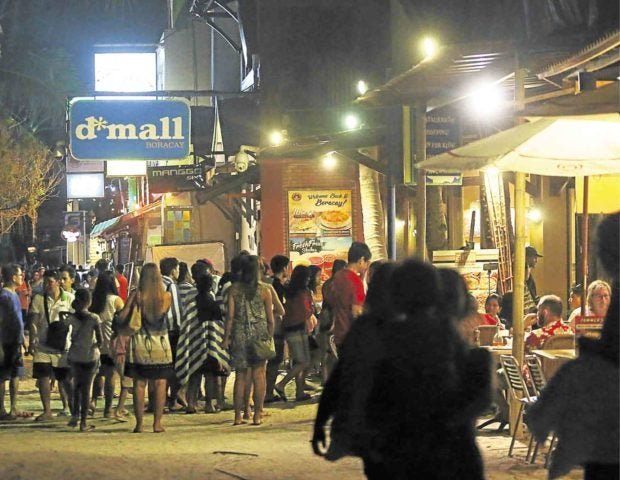 BACK IN BUSINESS Night life returns to Boracay days after the resort island reopened to tourists following a six-month closure for rehabilitation. —MARIANNE BERMUDEZ

The National Bureau of Investigation has filed new charges against resort owners and government officials, including Aklan Mayor Ceciron Cawaling and his predecessor, John Yap, for violation of environmental laws in the resort island of Boracay.

One of the resort owners named in the charge sheet, Ramon Cojuangco Jr. of Playa Asya Resort, is a cousin of former President Benigno Aquino III.

The other resorts named in the NBI complaint were Skygarden de Boracay Corp. and Kingfishers Farm.

Three different charge sheets, one per resort, were submitted to the office of acting Prosecutor General Richard Fadullon in the Department of Justice on Monday night.

The NBI said the resort owners and government officials should be charged with graft and violation of the Local Government Code.

The bureau added that those recommended for prosecution violated Section 20 in relation to Sections 79 and 84 of the Revised Forestry Code of the Philippines.

Sections 20 and 79 refer to the licensing of unlawfully registered or illegally occupied forest lands. Section 84 refers to the declaration of taxes.

For Kingfishers Farm, the NBI also recommended that it be charged with violating section 102 of the Philippine Fisheries Code, which refers to acquatic pollution.

This was the third set of cases that the NBI’s Task Force Boracay has filed since President Duterte ordered the closure of the island due to environmental degradation.

The island reopened in October after a six-month rehabilitation.

The owner of Kingfishers had declined to comment on the charges filed by the NBI.

Architect Lara Salaver, Kingfishers owner, said she would rather not issue a statement as of now on the complaint.

Salaver, in public hearings during the six-month closure of the island, had repeatedly denied that her property encroached on the island’s forest areas. —WITH A REPORT FROM NESTOR P. BURGOS JR.

Read Next
PH may fall into debt trap with China funds, says firm
EDITORS' PICK
Someone from the Philippines can become $356 Million richer this Tuesday
Cherry Mobile teams up with Cloud Panda PH, launches online store
Trump took shelter in White House bunker as protests raged
Calida attends House hearing on ABS-CBN franchise
Leveling up your ‘lutong bahay’ with the kitchen companion you never knew you needed
WATCH: Edsa traffic blues on GCQ Day 1
MOST READ
‘If I had not been SolGen, I will make you eat your words,’ Calida tells Coco Martin
5 car dealership outlets shutting down
Calida says he is not ‘at loggerheads’ with Congress on ABS-CBN issue
WATCH: Edsa traffic blues on GCQ Day 1
Don't miss out on the latest news and information.