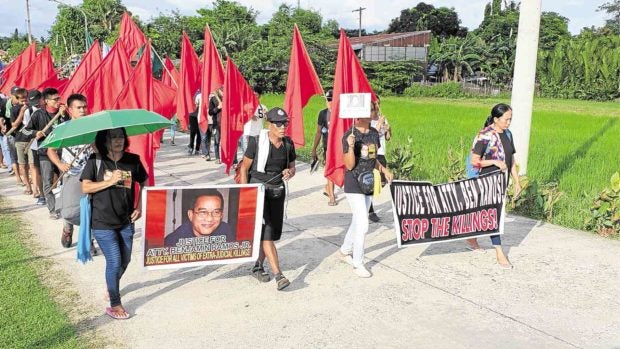 “It is possible that the two or their proxies, like paid assassins or militiamen, could be involved in the killing of (Ramos) and other cases of harassment,” Olalia told the Inquirer.

Ramos, a NUPL founding member and secretary general of its Negros chapter, was shot dead on Nov. 6 in front of a convenience store in Kabankalan City, Negros Occidental province.

In an earlier interview, Clarissa Ramos, widow of Ramos, said she also wanted the two men to be investigated after they were detained by the police in Sipalay City.

Alemen and Villahermosa were detained after NUPL lawyers and activists sought police assistance on Saturday when one of the motorcycle-riding men allegedly brandished a handgun as they passed the Sipalay City gymnasium where the wake for Ramos was being held.

The two men were also seen tailing a convoy of NUPL lawyers and human rights activists from Bacolod City to Sipalay City.

But Col. Benedict Arevalo, commander of the Army’s 303rd Brigade, dismissed the allegations.

“They had mission orders and they were not harassing them. These leftists have a propensity to spread lies,” he said.

Arevalo said the two men were tasked to “monitor and provide security” to the convoy, which included Olalia and other NUPL members and officials of the human rights group Karapatan.

“If something bad happened to them, they would again blame the government. That’s why the two were there,” he said.

Arevalo also dismissed allegations linking them to the killing of Ramos.

Judge Wenie Espinosa of the Municipal Trial Court in Sipalay City ordered the release of Alemen and Villahermosa on Monday after their lawyer posted bail of P3,000 each for grave threats.

Olalia said they were questioning why only one firearm was recovered from the two men when witnesses had seen them armed with a handgun each.

He also said one of the men, who identified himself as Villahermosa, did not have an identification card and could have given a false name.