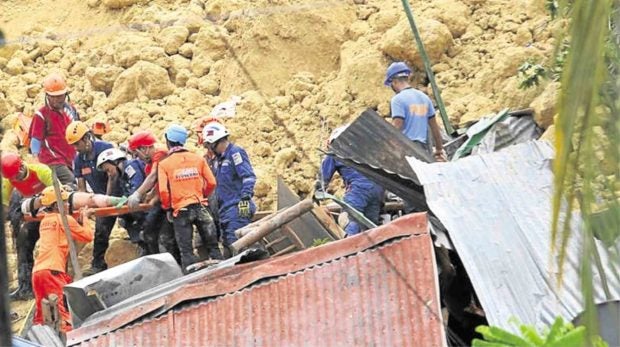 RACE AGAINST TIME Rescue workers race against time as they search for people buried in soil and rocks after a massive landslide hit a section of Tinaan village in Naga City, Cebu, in September. – JUNJIE MENDOZA/CEBU DAILY NEWS

Residents of Naga City in Cebu province filed last week a P4.5-billion lawsuit against private and public entities believed responsible for the landslide in the city that killed 78 people on Sept. 20.

Sued were Cemex Holdings Philippines Inc. and its subsidiaries, Apo Land and Quarry Corp. and Apo Cement Corp.; Mines and Geosciences Bureau (MGB) in Central Visayas; and the local governments of Naga City and Cebu province.

MGB Director Wilfredo Moncano said the case was filed on the grounds of negligence and nonenforcement of the government’s disaster preparedness plans. He spoke to reporters on the sidelines of the Philippine Mine Safety and Environment Association conference in Baguio City on Thursday.

The government has yet to file a counterclaim.

Cemex, in a statement, said it had been “compliant with all pertinent laws, rules and regulations; and likewise performed under the supervision and monitoring of various government agencies, both local and national.”

The lawsuit is asking Cemex, Apo Land and Apo Cement to pay the landslide victims P4 billion in damages and P500 million as rehabilitation fund for the landslide area at Barangay Tinaan in Naga.

The case had to be reraffled after Naga City Regional Trial Court (RTC) presiding judge, Dennis Larrobis, inhibited from the case since the lead counsel of the petitioners, lawyer Benjamin Cabrido, was a former classmate and fraternity brother.

Earlier, Environment Undersecretary Benny Antiporda said the site where the landslide occurred was within a geohazard zone and outside a mining area. He said the slide could not have been caused by mining.

However, Naga City residents said the quarry operations of Cemex and its subsidiaries were to be blamed for the landslide.

“We’ve been with two meetings with Cemex and Apo Land already and they requested for the lifting of the suspension, but this cannot be done until they comply with our given requirements,” Moncano said.

DISASTER AREA The community struck by landslide is near a quarry site in Naga City. —PHOTO COURTESY OF THE OFFICE OF THE PRESIDENTIAL ASSISTANT FOR THE VISAYAS

He said the Department of Environment and Natural Resources had ordered Apo Land to build a safety wall that would contain its hazard materials away from its perimeter area.

It also ordered the immediate cleanup of debris and other materials washed away by Typhoon “Ompong” (international name: Mangkhut).

Moncano quoted Apo Land as saying it would start compliance provided that it would be allowed to continue its operations. It said the fund for the rehabilitation would come from its cement plant.

The company is said to be spending P2 million daily to feed around 8,000 evacuees who were rendered homeless by the landslide.

Moncano said the company’s hazard reduction plan must be finished by February next year before it could resume operations.

Cabrido said he expected the case to be raffled by the office of the clerk of court of Talisay City RTC on Nov. 26.

He also said they would request that the trial be done in Naga City RTC so the proceedings would be accessible to landslide victims.

Before Larrobis’ inhibition, he was supposed to decide on the petition to prohibit Apo Land from resuming operations while the class suit was being heard.