From cars to bars: The Japanese cell of Nissan’s Carlos Ghosn 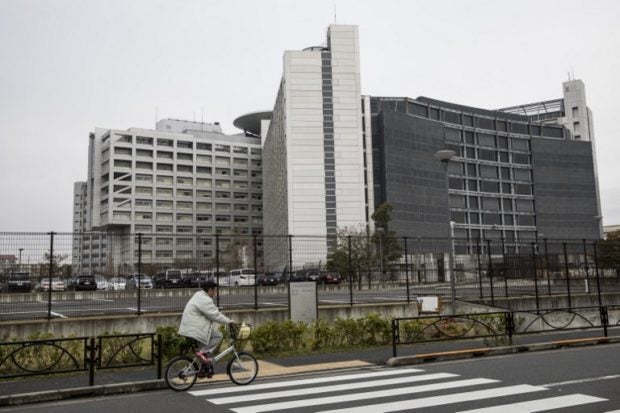 A man rides his bicycle outside the Tokyo Detention House, where Nissan chairman Carlos Ghosn is being held, in Tokyo on November 22, 2018. AFP

TOKYO, Japan — A solitary cell, 30 minutes of daily exercise and two baths a week: Carlos Ghosn’s new routine is a world away from the private jets and lavish parties the millionaire tycoon once enjoyed.

The 64-year-old auto industry titan stands accused of serious financial misconduct and is being questioned at a concrete 12-floor detention centre in northern Tokyo which also houses convicted criminals and even death-row inmates.

While it is impossible to know Ghosn’s exact surroundings, lawyers who have made several visits there to clients as well as former detainees paint a picture of an austere facility where solitude is the biggest enemy.

Veteran attorney Yoshiro Ito said the barren rooms have nothing but a bed, toilet, and a handle-less door with an iron-barred window.

Detainees follow a strict routine. Wake-up call is shortly before 7am and lights out at 9 p.m.

Breakfast, lunch and dinner are provided. For an extra charge, inmates can order additional food from pre-approved options.

It is a far cry from the macaroons and colorful cakes photographed at Ghosn’s Marie-Antoinette-themed wedding party thrown in 2016 at the sumptuous Palace of Versailles near Paris.

Inmates have the option of taking half an hour of physical exercise and can take a bath twice a week.

“You can wear your own clothing but ties, strings and belts are taken away to prevent suicide,” said Ito.
Books and letters can be sent in but are all censored by prison officials.

‘Extremely lonely’
Generally, high-profile detainees are kept away from other inmates, with the cells either side and in front left vacant.

“There are solitary cells as well as rooms that can accommodate several people, but in special cases like Ghosn, I believe he is undoubtedly in a solitary room,” said lawyer Ito.

Takafumi Horie, a Japanese businessman detained at the same centre and later jailed in 2011 for securities fraud as head of Internet giant Livedoor, said the toughest part was “not being able to talk to people.”

Frenchman Ghosn has received a visit from the French ambassador as part of consular protection and the Brazilian consul has also seen the businessman who was born in Porto Velho in northwestern Brazil.

But Horie said his overriding memory at the centre is being “extremely lonely.”

“There was a guard who spoke to me through a small hole on the door and said he would talk to me for a short while… Honestly, I cried,” said Horie in his book “Tettei Kosen” (“Total Resistance”).

Horie said there was no track of time in the cell, as the clock was removed “because some people try to commit suicide or harm themselves by using plastic or glass covering the clock.”

Even toothbrushes and hand towels were taken away each night, said Horie.

“Until I was detained, I didn’t realise that losing the freedom to look at my face (in the mirror) was this tough,” said the former inmate.

Following Ghosn’s arrest, Horie tweeted it would also be “pretty cold” at this time of year.

‘American crime drama’
Toshio Sakamoto, who worked as a prison guard there for nearly three decades, said conditions would be “very tough” and not just for Ghosn, but also for officials monitoring a maximum of 3,000 inmates.

“He’s super-famous and rich and a foreign national. It’s very difficult to detain someone like him due to the language barriers and difference between Japan’s justice system and the system he knows,” Sakamoto told AFP.

If he had complaints, he would only be able to address the detention centre staff, whose English would unlikely be strong enough to understand every detail, added the former guard.

“It’s a disaster for the Tokyo Detention Centre. You must be very careful to prevent any mishap, which could be an international issue. I wouldn’t want to be there myself,” he said.

He described the centre as a “monster” not just because of its size but “because you never know what will happen there.”

Sakamoto said he was aware of cases where paparazzi-style conmen deliberately commit a crime so they can spy on famous inmates in the hope of splashing their story.

“It’s just like an American crime drama in there,” he said. /ee