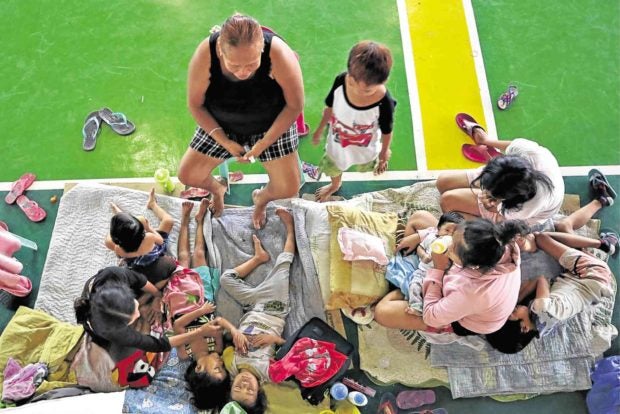 SAFETY Families from a riverside community in Surigao City take shelter in a covered court at Barangay Washington to ensure their safety as Tropical Depression “Samuel” approaches provinces in the Visayas and Mindanao. —ERWIN MASCARIÑAS

Rescuers found the body of Ronel Quibal floating on the river at Barangay Magsaysay in Palapag town, Northern Samar, around 1:20 p.m., about 21 hours after he was reported missing on Tuesday.

Quibal was swept by strong current while crossing the rampaging river aboard a motorcycle in Barangay Paysud, Palapag.

Seven towns in Northern Samar, including Palapag, were flooded, affecting 1,319 families, or 17,779 people, according to the Provincial Disaster Risk Reduction and Management Office.

The evacuees sought refuge in public schools and barangay halls that were on high ground.

There were landslides in Barangay Mirador, Mondragon town and Barangays Nipa and Maragano in Palapag but no immediate reports of casualties or damage.

As many as 4,488 families, most of them living near riverbanks, were affected by the flood, said Mayor Vivienne Alvarez.

Many started heading home when the water subsided hours later.

The Office of Civil Defense in Western Visayas reported that 86 families, or 412 people, were evacuated in Capiz and Negros Occidental provinces due to the floods.

There were no reported casualties and damage in the two provinces as of midafternoon on Wednesday.

Sea travel to and from the region, including boat trips between Iloilo and Bacolod cities, remained suspended.

Travel between Caticlan port in Aklan and Boracay Island and between Iloilo City and Guimaras were allowed only between 6 a.m. and 6 p.m.

In Bohol, evacuees in Candijay town started returning to their homes on Wednesday morning after the storm signal in the province was lifted by the state weather bureau.

At least 200 families from six villages were allowed to return home after the weather had improved, said Jeryl Lacang-Fuentes, the local disaster risk reduction and management officer.

But Fuentes said Samuel’s rains did not trigger floods or landslides in Candijay, 97 kilometers southeast of Tagbilaran City.

The weather bureau said a large part of Luzon and Visayas would continue to experience moderate to heavy rains as Samuel moved away from the country.

As of 4 p.m. on Wednesday, the tropical depression was estimated at 65 km south-southeast of Cuyo town in Palawan, and was moving west at 30 kph, according to the Philippine Atmospheric, Geophysical and Astronomical Services Administration.