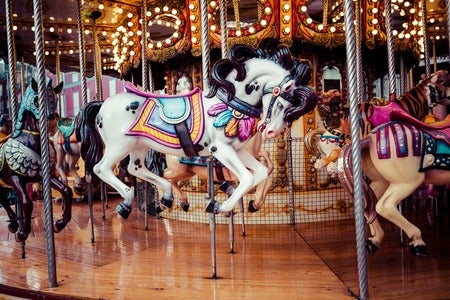 While a shopping mall in Chengdu, China was criticized for using real ponies on its merry-go-round, wildlife authorities maintained there is nothing inhumane about the amusement ride.

The carousel-inspired entertainment facility at Shuangliu Wanda Plaza has been in operation for two months, starting last Sept. 16, as reported by Chengdu Business Daily via China Daily yesterday, Nov. 19. It operates four hours daily and each ride lasts around four minutes.

Just like the wooden horses used for the amusement ride, four of the six ponies used in the facility are strapped to steel tubes and are made to walk in circles. Videos of the carousel-like ride circulated in Chinese social media, such as the video below from Pear Video. The condition of the ponies drew the ire of citizens.

“People should ride horses at a professional horse ranch instead of a carousel in which real horses are tied,” one netizen, Feifei, said in the report. “The ponies are living creatures, not toys. It’s inhuman.”

In response to the alleged animal cruelty issue, wildlife authorities asserted that the ponies in the merry-go-round were in no way maltreated.

“In our country, there are no regulations or laws that ban living animals from amusement equipment,” head of the Wildlife Rescue Center in Chengdu’s Yaodu District, Zhou Ming, told the publication. He said that the facility has no effect on the horses based on the current durations and the intensity of the ride.

“The horses move not by their free will but are forced by the machine so they cannot relax at all,” he said in the report. “If it is my horse, I will never do this.”

Apparently, this is not the first time real horses were used in place of wooden ones for carousel-inspired rides. In 2014, as reported by ET Today, a night market in Taiwan angered netizens after it used three ponies for its entertainment facility. Kate Matriano/JB