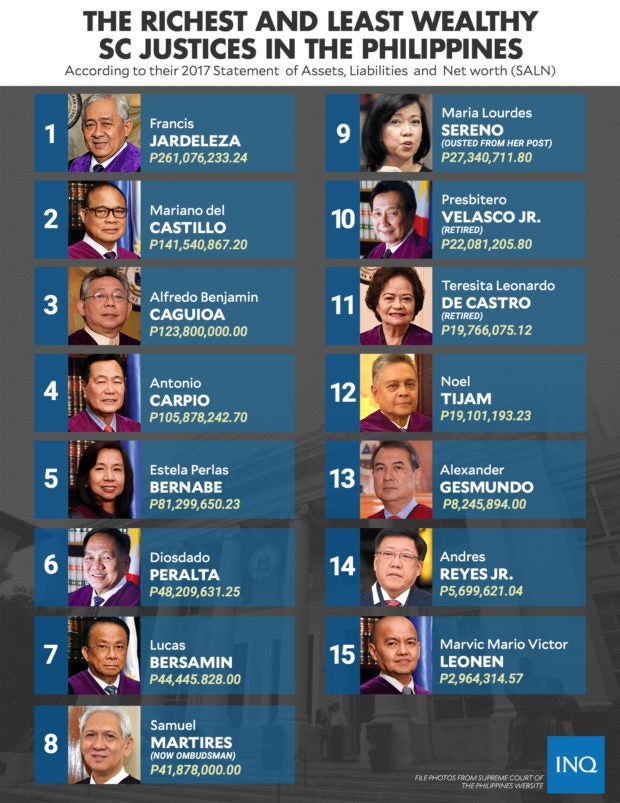 Supreme Court Associate Justice Francis Jardeleza remains the richest magistrate of the Supreme Court with a net worth of P261, 076, 233.24 in his 2017 Statement of Assets, Liabilities and Net worth (SALN).

Associate Justice Marvic Leonen is still the magistrate with the least declared wealth on his SALN with a net worth of P2,964,314.57.

Jardeleza’s real property is still at P58.9-million while his personal property increased from P193-million to P202.1 million with no liability. He jointly filed his SALN with wife Concepcion.

On the other hand, Leonen’s net worth rose from 2016’s P2.485-million. His real properties are still pegged at P3.4 million while personal property increased to P3.1-million from P2.6 million in 2016.  He declared liabilities worth P3.6-million.

Peralta, during his interview with the Judicial and Bar Council (JBC) said his net worth increased because it was jointly filed with his wife, Court of Appeals Associate Justice Fernanda Lampas-Peralta.

He added that it also accumulated because of his chairmanship of the Bar examination committee and as member of the electoral tribunal.

Ranked 8th is retired Supreme Court Justice, now Ombudsman Samuel Martires with a net worth of P41, 878,000. His real properties are valued at P13.3-million while his personal properties are at P28.5-million with no liability.

The two new associate justices Alexander Gesmundo and Andres Reyes were 13th and 14th in declared net worth.

The High Court annually releases the SALN of its justices as part of the judiciary’s transparency campaign.

In 2012, the tribunal approved the release of the SALNs of justices after the ouster of former chief justice Renato Corona in May 2012 due to millions of assets not declared on his SALN.

In a resolution in June 2012, the SC stressed that only copies of latest SALNs, PDS and CVs of justices should be released.

Request for previous records should be granted only under justifiable grounds as specified under Republic Act 6713 (Code of Conduct and Ethical Standards for Public Officials). /cbb

Read Next
Protesters picket Chinese Consulate in Makati City
EDITORS' PICK
Geek out at TOYCON 2022 powered by Smart Signature
UK’s Boris Johnson will resign, BBC reports
High inflation: Your P1 is now worth only 87 centavos
High-risk pregnancy: Reducing your risk is in your hands
Unemployment rate up to 6% in May
House energy committee chair Arroyo bats for cheap electricity
MOST READ
Suspect in grisly killing of missing woman in Bulacan arrested
Kim Atienza’s daughter flaunts bikini body in response to critics of her ‘revealing photos’
Cop slain in Isabela ambush
FDA probes popular Filipino noodle brand for ‘high level of ethylene oxide’
Don't miss out on the latest news and information.