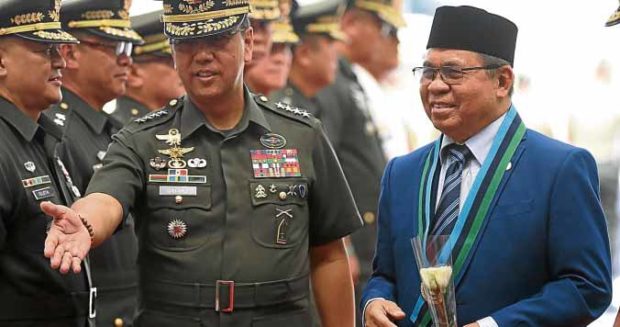 “Veni, vidi, vici,” Murad declared at a press conference with AFP chief Gen. Carlito Galvez Jr., before adding to the Latin victory statement attributed to Julius Caesar in English, “I came, I saw, I found friends and I made peace.”

Murad recalled that ever since he joined the Bangsamoro’s fight some 40 years ago, he had avoided military camps and had thought only of destroying them.

“We have never considered the AFP or any soldier of the republic our enemy. What we have always considered the enemy is oppression and injustice,” he said.

Murad admitted that in the MILF’s struggle for self-determination, the group viewed the AFP as an instrument of injustice, particularly during the administration of dictator Ferdinand Marcos.

“The resort to an armed struggle was a last and difficult option [for] what we viewed then [as] a genocidal war being pursued by the Marcos regime against our people,” he said.

Murad noted that the AFP transformed itself into a professional institution after the 1986 Edsa People Power Revolution that toppled Marcos.

His visit to Camp Aguinaldo reciprocated Galvez’s Oct. 6 visit to the MILF’s Camp Darapanan in Maguindanao, where the AFP chief declared the end of war between the military and Moro group.

In that visit, Galvez said some 6,000 men and women lined the 5-kilometer stretch to Camp Darapanan to welcome him.