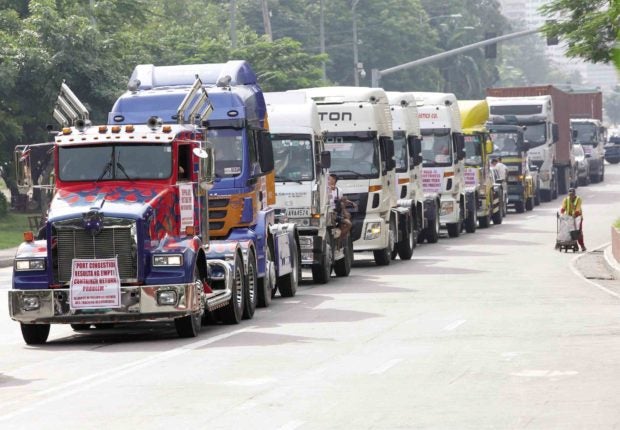 NO DELIVERIES Around 30 trucks under the Alliance of Philippine Brokers and Truckers Associations roll out in convoy on Road 10 in Tondo, Manila, on Monday to launch the six-day protest. —Marianne Bermudez

A group of truckers and customs brokers on Monday started what they called a six-day “truck holiday” to protest the government plan to phase out aging trucks and to demand solutions to the congestion problem in the Port of Manila.

Instead of hauling cargo, members of the Alliance of Philippine Brokers and Truckers Associations (APBTA), drove in convoy on Road 10 in Tondo, honking horns to draw attention to their “Days of Rest” until Nov. 24.

APBTA president Teddy Gervacio assailed the directive of the Department of Transportation (DOTr) to ban public utility vehicles, as well as trucks that had been on the road for 15 years or more, as part of the government’s modernization program for the transport sector.

“What the government should look into is the roadworthiness of the truck,’’ he said. “Not all accidents are caused by old trucks.”

If implemented, Gervacio said, the order would drive 90 percent of the truckers in his organization out of business, their crews adding to the unemployed.

In a dzMM interview, Aduana Business Club Inc. president Mary Zapata also took the government to task over on the cramped container yards of some shipping lines, saying they add to the delay of trucking operations.

Gervacio said APBTA members used to make at least one delivery a day, but now they could only make “two per week” due to the port congestion.

Meanwhile, Steven Cua of the Philippine Amalgamated Supermarket Associations warned that disruptions in the delivery schedule caused by the truck holiday might lead to price hikes. “Distributors will have less products to be allocated among stores and may prompt them to increase their prices,” he said.

The DOTr, however, assured the public that the truck holiday would only have a “minimal impact” on the movement and prices of consumer goods in the weeks leading to Christmas.

In a statement on Monday, the DOTr said major trucking companies had advised the agency that they were not taking part in the protest.