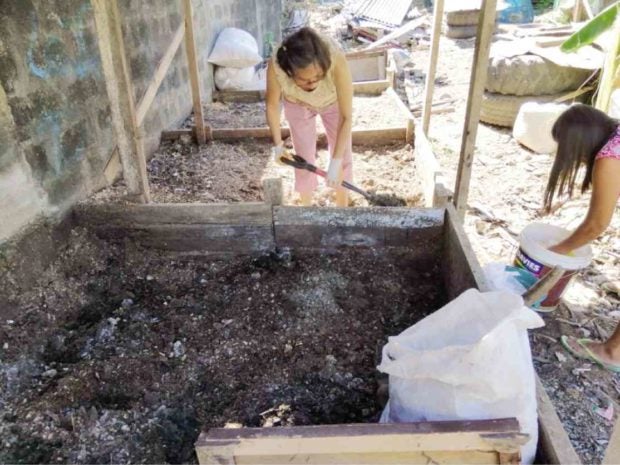 For residents of United Parañaque Subdivision (UPS) 5 at Area 7, Barangay San Isidro, garbage is no longer a problem.

“Before, my mixed (household) waste could fill up two big drums and five smaller pails,” Evangeline “Tata” Domine said. “Now I hand over just a small pail, half full, to the truck from Cenro (City Environment and Natural Resources Office).”

Tata was among the participants in the first ecological orientation held by Bangon Kalikasan Ecology Centers in Parañaque City.

Years earlier, our cousin, the late Philippine Basketball Association legend Adriano “Jun” Papa, who had resided there, suggested that we orient his community, since his wife, Waffles, was also into composting.

Back in 2000, we also got to meet former Vice Governor Edwin Olivarez of Laguna when we conducted an orientation there.

Now the Parañaque mayor, Olivarez welcomed our initiative for his city: “With our focus on composting, I look forward to substantial waste reduction.”

While encouraging her neighbors to segregate their wastes, Tata was able to attend three sessions, developing a deeper appreciation of ecological management, its benefits for the community and its adherence to values and teachings about caring for God’s creation.

Her enthusiasm ultimately infected her neighbors. Today, a total of 88 UPS households are segregating waste at source, composting at home or on vacant lots.

Those who have yet to do their own composting give their biodegradable wastes to Gecel Madelo, who collect them in the shed set up by Tata, her husband, Paul, and Willy Malabago, a barangay eco-aide.

To process the community’s garden waste, a second shed had to be built, for which Bangon Kalikasan donated old lumber and roofing materials.

There, Willy and Gecel’s husband, Carlos, are in charge of regularly sprinkling the soil-covered pile with water, turning it over to aerate it and allow the heat of the sun to penetrate.

The heap’s transformation into compost can be completed in three weeks.

Since bio-wastes make up almost 60 percent of the community’s total waste output, composting can lead to substantial waste reduction and — for Area 7 — the big bonus of having vegetable gardens where there used to be open dumps.

Gecel also accepts nonbiodegradable wastes, including residual materials like laminates or sachets, which junk shops normally don’t buy. She cuts them up and collects them for recycling into “eco-bricks.”

Meanwhile, Cenro collects other residuals that don’t reach Gecel, also for recycling. (Republic Act No. 9003, or Ecological Solid Waste Management Act, calls for the eventual phaseout of plastics, and other non-environmentally acceptable packaging, or NEAP.)

Another resident, Lolly Ulit, coordinator for Our Lady of Unity Parish at UPS 5, is spreading the good news to more parish organizations. Elsewhere, the families of Antonio Flores of Area 6; Menchie Lacad, Carmelita Tioxon and other residents of Creekside Lopez; and Wilma Santos of Riverville, among others, have also gone into composting.

Fourth Estate Area 3 in Barangay San Antonio, led by Rose Laman, a resident in her mid-80s, is also about to put up a composting shed, for which Bangon Kalikasan has donated materials.

Through composting, Tata’s Area 7 alone was able to reduce its waste by 70 to 80 percent. Imagine if that feat is replicated in the rest of Metro Manila. —CONTRIBUTED