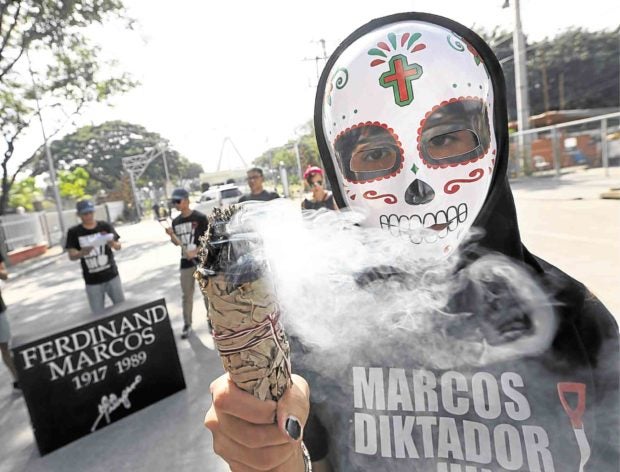 A militant group has called not only for the removal of former President Ferdinand Marcos’ body from Libingan ng mga Bayani but also for the arrest of his wife, Imelda, who has been convicted of graft charges.

Members of Block Marcos went to the cemetery for heroes in Taguig City on Sunday to reiterate their demand for the exhumation of the dictator’s remains and the arrest of his 89-year-old widow.

“Her conviction by the court just proves what we have been saying all along, that the Marcoses are a family not just of murderers, liars and thieves. Marcos does not deserve to be buried along with the country’s true heroes who died serving our country,” said Robert Docena, the group’s spokesperson.

On Nov. 9, the Sandiganbayan found the former first lady guilty of seven counts of graft in connection with the Swiss foundations she and her husband established to stash more than $200 million abroad while they were in power.

The antigraft court, however, allowed her to remain free temporarily on a P150,000 bail bond while she appeals the ruling on the 27-year-old case.

Block Marcos slammed the court’s decision, saying her bail was “just small change [compared to] the billions [of pesos] they had plundered from the Filipinos for years.”

It also took note of the Philippine National Police’s hesitancy in arresting her due to her age and health.

“The special treatment afforded to Imelda clearly showed that despite being out of Malacañang for decades, the Marcoses have still so much power that they can get away with so many things,” the group said.