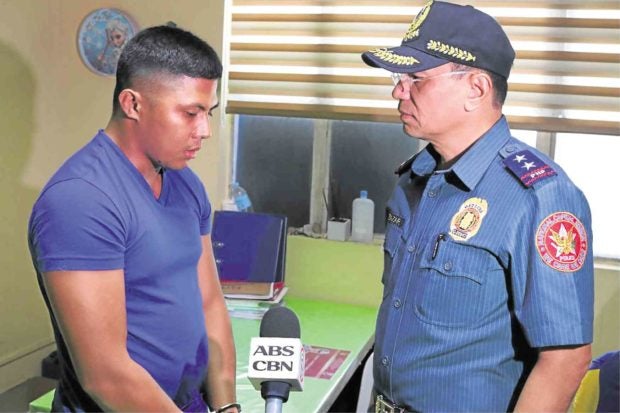 The police are eyeing a love triangle as the motive behind the killing of a police officer by his colleague on Saturday at the National Capital Region Police Office (NCRPO) headquarters in Camp Bagong Diwa, Taguig City.

PO1 Mark Carlo Pasamba died after he was shot three times in the chest by PO1 Carlos Alberato Aljama, 31, in what NCRPO chief, Director Guillermo Eleazar, called a “crime of passion.”

Both were assigned at the NCRPO’s Regional Mobile Force Batallion (RMFB) although they belonged to different units. The 29-year-old Pasamba had been with the 4th Mobile Force Battalion for six years.

Aljama, on the other hand, was at the Administrative Holding Unit for being absent without leave for two days in August.

Both had just attended a seminar intended to “enhance police skills and promote work ethics” when they encountered each other.

According to a colleague who witnessed the incident, Pasamba was about to leave when he was “angrily confronted” by Aljama inside Camp Bagong Diwa at 8:30 a.m. on Saturday.

Aljama then shouted an invective at the victim before shooting him with his 9mm service firearm.

Pasamba was rushed to Taguig-Pateros District Hospital where he died.

Aljama, on the other hand, was taken into custody by his colleagues who turned him over to the Taguig City police.

Quoting the suspect, Eleazar said that Aljama’s wife, a policewoman who was also assigned at RMFB, had an affair with Pasamba.

The suspect refused to talk about what he told Eleazar, saying he needed to consult his lawyer first.

Eleazar said the “unfortunate incident” showed the need for policemen to “uphold PNP ethical standards, including respect for the sanctity of marriage.”

But he clarified that no matter what the suspect’s reasons were for killing his colleague, the police would still file a criminal case of murder and an administrative case of grave misconduct against him, which could lead to his dismissal from the service.