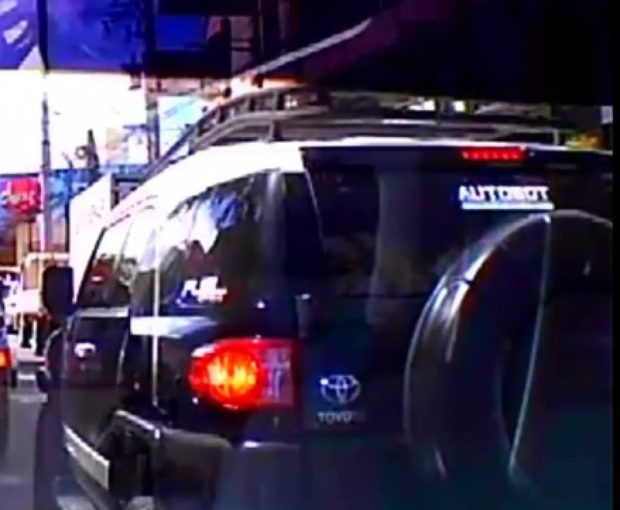 A video grab shows a Toyota FJ Cruiser that was featured on a social media viral video of an alleged road rage incident in Quezon City. A similar vehicle was involved in another viral road rage video in Pampanga. SCREENGRAB FROM RAKIZIM KIMPOLOLOY FACEBOOK PAGE

A suspect in a road rage incident in Pampanga whose car bears a special “8” license plate usually issued to congressmen was collared in Tarlac City, a news report said Wednesday.

The suspect, who was a driver of Toyota FJ Cruiser, was reported to have punched a fellow motorist along the McArthur Highway in Balibago, Angeles City, Pampanga on Sunday, according to a report from dzMM.

Police identified the suspect as Jojo Valerio, a 30-year-old entertainer from Quezon City. He was reportedly on his way to a gig in a casino in Angeles City when the incident happened.

The driver also reportedly claimed that he was the son of a certain congressman.

A video of the incident has gone viral on social media.

The suspect was arrested during a gig in Tarlac through police hot pursuit operation on Tuesday night.

Police said that he was a 30-year-old entertainer from Quezon City who was on his way to a gig in a casino in Angeles City when the incident happened.

Police added that he was not a relative of Pampanga Rep. Carmelo Lazatin II, who has denied owning the vehicle involved in the road rage incident.

The suspect is currently detained at a police station in Angeles City. Charges are also being prepared against him.

The news report said that the police were investigating how the suspect obtained a special “8” license plate issued to congressmen in the 16th Congress. /cbb