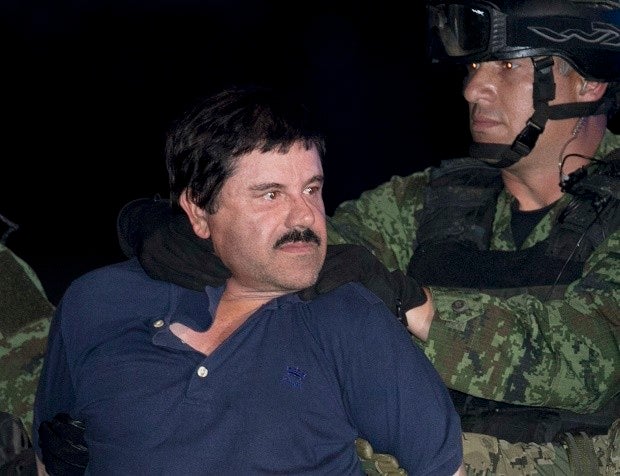 In this Jan. 8, 2016, file photo, Mexican drug lord Joaquin “El Chapo” Guzman is made to face the press as he is escorted to a helicopter in handcuffs by Mexican soldiers and marines at a federal hangar in Mexico City, Mexico. AP FILE

Opening statements finally got underway after two jurors were dismissed from the original lineup, forcing lawyers and the judge to re-interview potential candidates before a full panel could be sworn in.

Guzman, one of the world’s most notorious criminals who was extradited to the United States in January 2017 after twice escaping from prison in Mexico, faces 11 trafficking, firearms and money laundering charges in what is expected to be a more than four-month trial.

But defense lawyer Jeffrey Lichtman alleged that Guzman’s co-defendant who remains at large, Ismael “El Mayo” Zambada, was the real culprit — not Guzman, whom prosecutors say spent a quarter of a century smuggling cocaine.

“The truth is he (Guzman) controlled nothing, Mayo Zambada did,” Lichtman told the US federal court in Brooklyn.

Zambada, he alleged, bribed everybody, “including the very top, the current president of Mexico and the former,” he added in reference to Mexico’s outgoing President Enrique Pena Nieto and his predecessor, Felipe Calderon.

“Mayo can get people arrested and get the Mexican army and police to kill who he wants,” Lichtman added.

Instead, his client, who has been in solitary confinement since arriving in New York, is a “scapegoat.”

“Why does the Mexican government need a scapegoat? Because they’re making too much money being bribed by the leaders of drug cartels.” /cbb