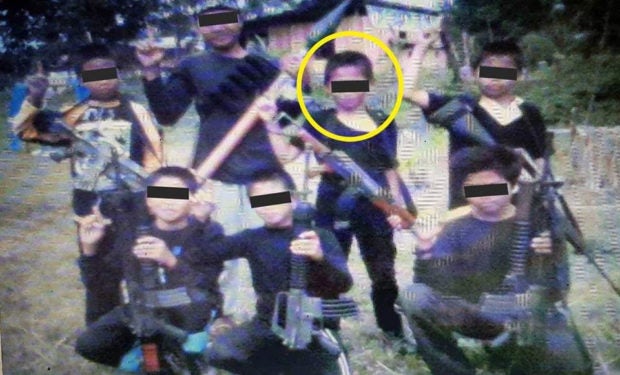 ILIGAN CITY — A 15-year-old cousin of the founders of the Maute terrorist group surrendered to the Joint Task Force Ranao in Butig, Lanao del Sur, the military has reported.

Major Clint Antipala, of the First Infantry Division, identified the Maute fighter as “AJ,” who turned himself in to the Army’s 49th Infantry Battalion (IB).

AJ was reportedly only 12 years old when recruited in Butig by his cousins Omar and Abdullah. The Maute brothers led the attack and take over of sections of Marawi City last year and triggered five months of fighting with government soldiers.

“He was trained with 12 other members and one of them already surrendered to the 49th IB on October 29,” Antipala said in a statement to the media.

In August, the military reported the surrender of an alias Asnar, 14, also an alleged fighter of the Islamic State-inspired Maute Group.

The military said Asnar was recruited by Abdullah Maute in 2014, when the boy was only 10 years old.

“Nine years old was the youngest recruit (of the Maute Group) and most of these recruits were involved in armed engagement with government forces in the month of February and November of 2016,” said Lt. Col. Edgar Allan Villanueva, 49th IB commander.

“We are glad to hear that AJ decided to surrender and this is the best chance for him to return to mainstream society,” Murillo said. /cbb