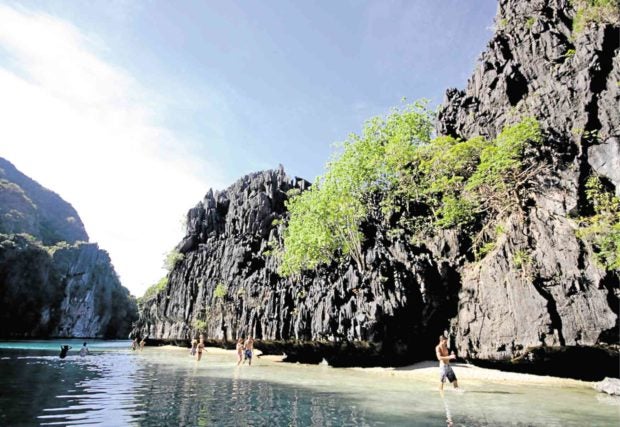 “But we have yet to assess and inspect if [El Nido] would be 100-percent compliant, like Boracay” Eduardo Año
Interior and Local Government Secretary

PUERTO PRINCESA CITY—Water pollution levels around the main beach area in El Nido town in Palawan province has gone down significantly, according to the latest tests conducted by the Department of Environment and Natural Resources (DENR).
ADVERTISEMENT

The DENR in Mimaropa (Mindoro, Marinduque, Romblon and Palawan) region said results of water tests in Bacuit Bay, released seven months after the agency and the local government began a cleanup drive against errant establishments encroaching on coastal easements, indicated that fecal coliform levels had gone down to “normal.”

“Seven months after the roll out of intensified environmental compliance monitoring of Task Force El Nido, the level of fecal coliform in Bacuit Bay within Barangays Masagana, Maligaya and Corong-Corong has reached, and been kept, at normal levels,” Henry Adornado, DENR regional director, said in a statement.

Water monitoring conducted at Barangay Maligaya, one of the town’s most congested areas, showed that total fecal coliform had gone down to a safe level of 24 most probable number per 100 milliliters, from 17,000 MPN in February this year.

Except for Barangay Buena Suerte, also a populated area, where fecal coliform levels reached 1,600 MPN, from 3,500 MPN in February, all other previous test sites showed safe levels of coliform.

Adornado said they were set to conduct more tests to determine if the improvements in the water quality of Bacuit Bay had to do with their current enforcement efforts.

“While this sounds good news, it is still too early to tell if the changes in coliform levels are due to the cleanup efforts,” he said.

The tests were being conducted by the Environmental Management Bureau.

Since the national government’s cleanup drive in El Nido began following the six-month closure of Boracay Island starting April, Task Force El Nido has issued notices to over 400 tourism establishments in the town and led the demolition of more than 200 structures built beyond the coastal easements.

Adornado said the DENR would continue its campaign against erring establishments. “We are eyeing to clear errant establishments off Bacuit Bay, hopefully by the end of the year,” he said.

As of August, 253 of 289 establishments in El Nido were found to have violated environmental and easement rules, DENR records showed.

Año said these two popular tourist destinations would be the DILG’s priority.

He and Tourism Secretary Bernadette Romulo-Puyat were set to meet with El Nido Mayor Nieves Rosendo to discuss the town’s situation.

“But we have yet to assess and inspect if it would be 100-percent compliant, like Boracay,” he told reporters on Monday.

Coron, he said, would be a priority because of its popularity.

“We’ve also received feedback that there were illegal sewers there [leading] to the sea,” Año said.

Panglao, another popular destination in Bohol province, is also on his list of priorities.

This period could last for a month to a year, he said.

President Rodrigo Duterte had ordered the closure of Boracay, a world-famous resort island in Malay town, Aklan province, after describing it as a cesspool because of the lack of sewerage facilities and its deteriorating environment brought about by uncontrolled development.

Recently, he told Palawan residents to impose stricter regulations and put a cap on the number of tourists to protect its natural wonders and spare the island from the fate that befell Palawan. —With a report from Leila B. Salaverria in Manila