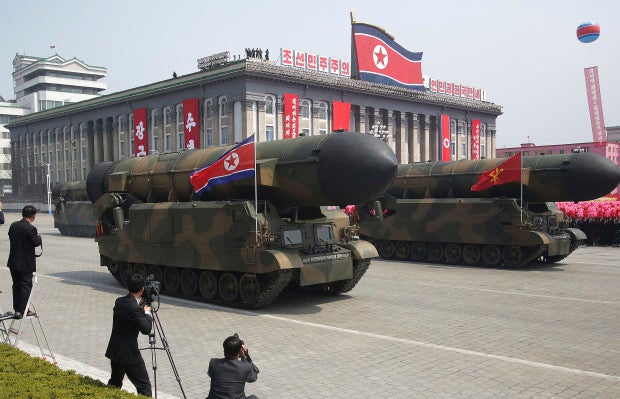 Trump has hailed his June summit with North Korean leader Kim Jong Un as having opened the way to denuclearization of the divided peninsula, defusing tensions that less than a year ago brought the two countries to the brink of conflict.

Since the summit in Singapore, North Korea has forgone nuclear and missile tests, dismantled a missile test site and promised to also break up the country’s main nuclear complex.

But researchers at the Center for Strategic and International Studies in Washington said they have located 13 missile operating bases that have not been declared by the government, and that there may be as many as 20.

“It’s not like these bases have been frozen,” Victor Cha, who leads CSIS’s North Korea program, told The New York Times, which first reported on the study.

“Work is continuing. What everybody is worried about is that Trump is going to accept a bad deal — they give us a single test site and dismantle a few other things, and in return, they get a peace agreement.”

Cha had been in line for appointment as US ambassador to South Korea, but was dropped because of disagreement with the Trump administration’s approach.

While US sanctions on North Korea remain in place, enforcement by traditional trading partners China and Russia has relaxed since the summit, US officials have acknowledged.

The bases, which are scattered across the country, are located in underground facilities tunneled in narrow mountain valleys, according to the researchers.

They are designed to enable mobile missile launchers to quickly exit the underground facilities and move to previously prepared launch sites.

“Any missile at these bases can take a nuclear warhead,” the report’s co-author, Joseph Bermudez, an authority on North Korea, told the Times.

The bases are arranged in three belts across North Korea, according to the report, with those for strategic missiles deep inside the country.

Medium-range missiles capable of striking Japan and all of South Korea reportedly are deployed in an operational belt 55 to 100 miles (90 to 150 kilometers) north of the demilitarized zone.

Bases for shorter range missiles fit into a tactical belt 30 to 55 miles from the DMZ.

The researchers relied on satellite imagery, defector interviews and interviews with intelligence and government officials for their findings.

The report included a detailed profile of one such tactical missile operating base, illustrated with commercial satellite imagery, just 84 miles northwest of Seoul.

The imagery shows barely visible entrances to seven underground facilities at the Sakkanmol missile base — each protected from artillery fire and air strikes by 60-foot-high (18-meter) berms made from rock and dirt excavated from the site.

The size of the entrances, as well as the volume of soil removed, indicates the base could house a brigade-size missile unit with up to 18 mobile launchers, the report said.

Concealed under two earth-covered shelters near one of the entrances is a drive-through facility where missile launchers are armed, fueled and maintained.

Barracks, administration facilities, support buildings and greenhouses for food are visible further down the valley.

The entrances to the underground facilities “are frequently hidden from sight in satellite imagery during spring and summer, just visible during fall and visible in winter after a snowfall,” the report said.

The Times said the Pentagon had planned to begin deploying a new generation of small, inexpensive satellites to track North Korea’s mobile missiles, but the program has been held up by bureaucratic and budget disputes.

Trump has said he hopes to meet again soon with Kim, but there are signs of growing friction in the negotiations with North Korean officials, which appear to have stalled.

US Secretary of State Mike Pompeo had been scheduled to meet Kim’s right-hand man, Kim Yong Chol, in New York last week to discuss denuclearization efforts and prepare for a possible second summit, according to the State Department.

But on Thursday, US Ambassador to the United Nations Nikki Haley said North Korea postponed the meeting “because they weren’t ready.”

The United States, meanwhile, has delayed approval of several requests for exemptions to UN sanctions to deliver tractors, spare parts and other humanitarian relief supplies to North Korea, according to documents seen by AFP. /cbb