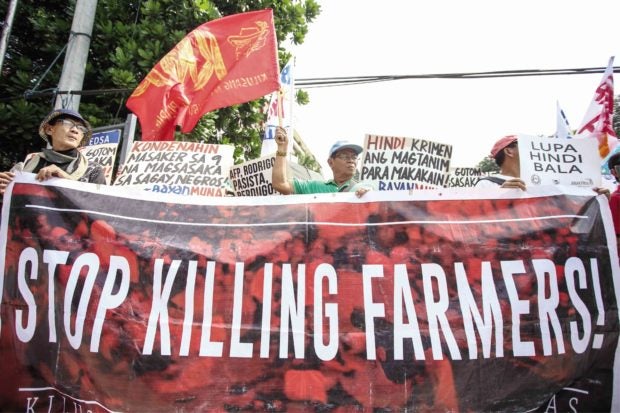 One of the messages, written in Ilonggo, read: “Do not twist the issue. You are the troublemakers in Negros. You are high profile leaders of New People’s Army. You, Roque, Nilo and Christian will be next.”

The message apparently referred to Roque Rillo, of National Federation of Sugar Workers, Noli Rosales, of the labor group Kilusang Mayo Uno and Christian Tuayon of Bagong Alyansang Makabayan in Negros, according to Singson.

One of the messages was an apparent warning to Singson and the others that they would be killed next.

“We will eliminate all troublemakers. Just continue what you are doing because it’s near,” read another message, still in Ilonggo.

Singson, also the provincial chair of the women’s group Gabriela, said it was the first time she received death threats through text messages but that she and her group had been regularly vilified by police and military officials.

Pictures of Singson and Ramos, along with suspected members of the New People’s Army, were among those printed in flyers and tarpaulin streamers with communist “personalities” displayed in areas in Negros Occidental.

The military had denied allegations of militant organizations that it was behind the streamers.

“We take the threats seriously because Nong Ben (Ramos) is dead,” Singson said in a phone interview.

“These are clearly aimed at paralyzing our organization and driving us to hide in fear,” Singson told the Inquirer in a phone interview.

“We are taking precautionary measures but we will not stop exposing human rights violations and seeking justice,” she said.

Ramos, 56, was killed after he was repeatedly shot in front of a convenience store at Barangay 5 in Kabankalan City on Nov. 6.

He was one of the founders of nongovernment organization Paghida-et sa Kauswagan Development Group (PDG) and was also founding member of the National Union of People’s Lawyers.

On Saturday, the remains of Ramos were brought to the PDG compound after an autopsy conducted by the Commission on Human Rights. Ramos and his family stayed inside the compound.

Singson said Ramos’ remains would be brought to his hometown in Sipalay City on Nov. 14.

Wake will be held at his ancestral house until his burial on Nov. 18 in Sipalay.