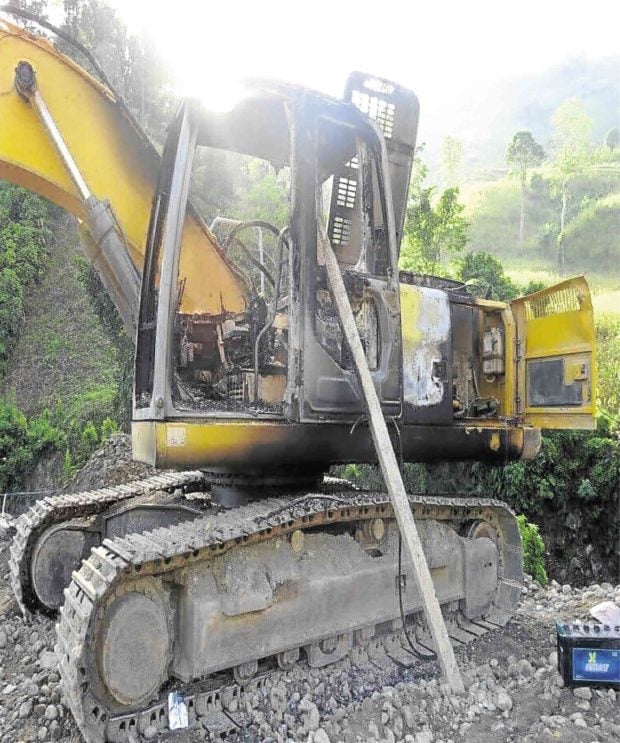 Supt. Aldrin Gonzales, spokesperson for the regional police, said 10 members of the New People’s Army (NPA) set ablaze a backhoe of Gemma Construction at the village of Lamfugon, Lake Sebu town, in South Cotabato around 10 p.m. on Friday.

“Clearly, this is the work of NPA, which has been mulcting the construction company,” Gonzales said.

Gonzales said rebels, under NPA’s Guerilla Front 73, had been operating in the hinterlands of Lake Sebu.

Earlier, on Oct. 4, NPA rebels also burned a truck, 20 sacks of fertilizers and 18 hectares of lemon at a plantation in Agusan del Sur.

The plantation was owned by a Charity Ampong at the village of Balit in San Luis town who was accused by rebels of being “despotic” to her workers.

Ampong, the NPA claimed in a statement, “gave impoverished wages to her farm workers amounting to P250 per day.”

“The workers can only have their time to rest during lunch break but they are required to rest in sheds or else their wage will be deducted,” the NPA said.

“During harvest period, the farm workers receive only P90 per sack they deliver,” said the statement signed by Omar Ibarra, NPA spokesperson in Agusan del Norte and Agusan del Sur.

The NPA statement owned up to the burning of the heavy equipment.

The NPA also claimed it clashed with militiamen belonging to the Army’s 26th Infantry Battalion.

A rebel was killed and eight militiamen were wounded in the clash, the NPA said.

Since 2015, more than a dozen heavy equipment of private firms engaged in road construction and concreting in the upland towns of South Cotabato, have been burned by the rebels.

In a statement last year, the NPA owned up to the burning of quarry equipment in Koronadal City. —With a report from Germelina Lacorte