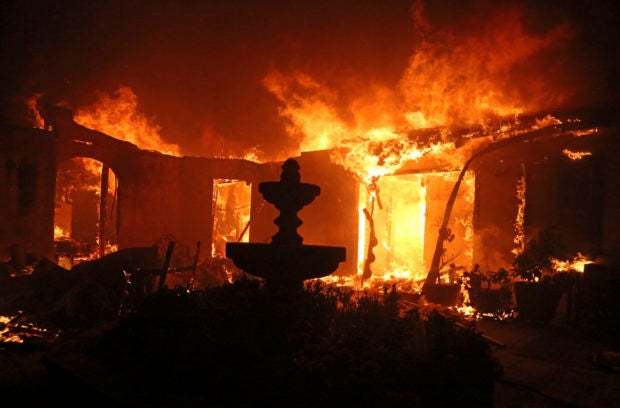 A Spanish-style home is consumed by flames on Dume Drive in the Point Dume area of Malibu, Calif., Friday, Nov. 9, 2018. Known as the Woolsey Fire, it has consumed tens of thousands of acres and destroyed multiple homes. AP

MALIBU, California, United States — Two people were found dead and scores of houses from ranch homes to celebrities’ mansions burned in a pair of wildfires that stretched across more than 100 square miles of Southern California, authorities said Saturday.

The two bodies were found in Malibu, but Los Angeles County sheriff’s Chief John Benedict offered no further details. They were discovered in the area of a winding stretch of Mulholland Highway with steep panoramic views, where on Saturday the roadway was littered with rocks, a few large boulders and fallen power lines, some of them still on fire. Most of the surrounding structures were leveled.

The deaths bring to 11 the number of people killed in the state’s wildfires in the past few days, with nine found dead in a Northern California wildfire.

Firefighters have saved thousands of homes despite working in “extreme, tough fire conditions that they said they have never seen in their life,” Los Angeles County Fire Chief Daryl Osby said.

Those vicious conditions on Friday night gave way to calm Saturday, with winds reduced to breezes.

Firefighters used the lull to try to rein in the powerful blaze that had grown to 109 square miles (282 square kilometers) and get a grasp of how much damage it did in its first two days.

Osby said losses to homes were significant but did not say how many had burned. Officials said earlier that 150 houses had been destroyed and the number would rise. About 250,000 homes are under evacuation orders across the region.

Fire burned infamously ritzy coastal spots like Malibu, where Lady Gaga, Kim Kardashian West, Guillermo del Toro and Martin Sheen were among those forced out of their homes amid a citywide evacuation order.

The flames also burned inland through hills and canyons dotted with modest homes, reached into the corner of the San Fernando Valley in Los Angeles, and stretched into suburbs like Thousand Oaks, a city of 130,000 people that just a few days ago saw 12 people killed in a mass shooting at a country music bar.

The wildfire raged on both sides of the city still in mourning, where about three-quarters of the population are under evacuation orders that officials urged them to heed.

“We’ve had a lot of tragedy in our community,” said Ventura County Supervisor Linda Parks, whose district includes Thousand Oaks. “We don’t want any more. We do not want any more lives lost.”

Nothing was left but the horses for Arik Fultz, who spent Saturday sifting through the remains through the charred remains of his 40-acre ranch near Malibu.

“It just doesn’t feel real that it’s all gone,” Fultz said. “Just yesterday, what, 24 hours ago I was feeding horses in the morning.”

All 52 horses survived, after a wild scramble to save them.

Fultz’s mother, 61-year-old Tricia Fultz, said everyone expected the fire to stay well south of their property, but shifting winds forced them to take the horses out to open pastures as quickly as they could.

Three were still in their pens when the adjacent barn caught fire, and Tricia Fultz just had to open the pens, burning her hands and hoping for the best.

She, her husband and six others rode out the fire in a tunnel a short distance up the road as the fire burned the hillsides above and all around them.

“It’s so surreal because it’s so dark, and when we’re in the tunnel you can’t see anything,” Tricia Fultz said. “There was so much burning and so much black.”

Ben Watkins drove through flames trying to get back to his home in Los Angeles.

He was driving from Santa Barbara when fire brought traffic to a stop and he decided to wait it out on a beach in Malibu, watching as the blaze drew closer.

Finally, he decided to make a run for it, hopping in his vehicle and driving home through flames that lapped at the Pacific Coast Highway.

“It’s survival mode,” Watkins said Saturday after making it home the day before. “You’re thinking about how you have to get home at all costs.”

The area burning in Southern California is in severe drought, U.S. government analysts said. California emerged from a five-year statewide drought last year but has had a very dry 2018, pushing parts of the state back into drought and leaving others, like the area of the Northern California fire, abnormally dry. /cbb