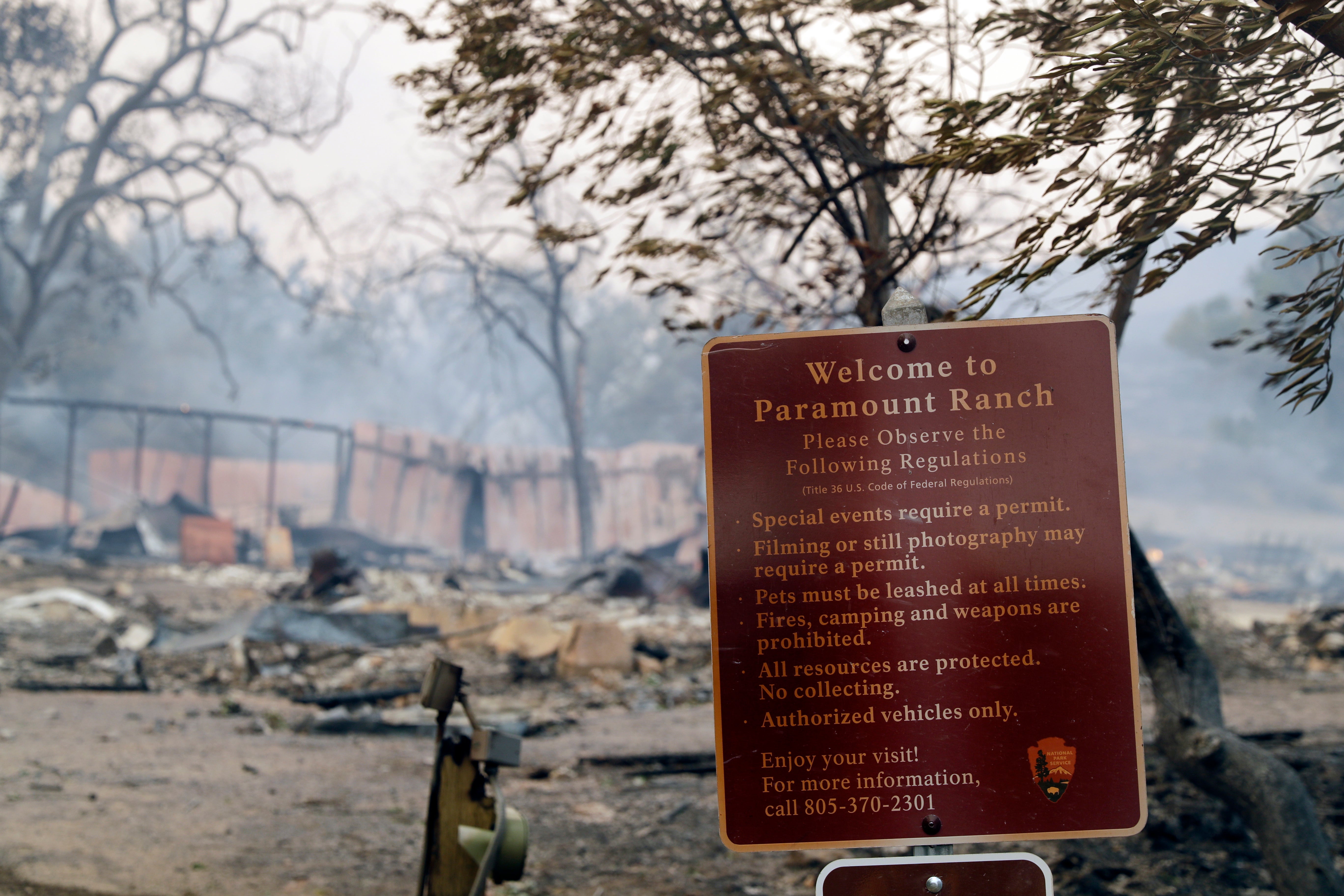 Paramount Ranch, where a number of Hollywood westerns have been filmed, is seen after it was decimated by a wildfire Friday, Nov. 9, 2018, in Agoura Hills, California. (AP)

LOS ANGELES — A fast-moving wildfire in Southern California has scorched a historic movie site recently used by the HBO series “Westworld” and forced numerous celebrities to join the thousands fleeing flames that have claimed homes and prompted the total evacuation of the celebrity enclave Malibu.

Lady Gaga, Kim Kardashian West, Scott Baio, Rainn Wilson and Guillermo del Toro are among numerous celebrities forced to evacuate their homes, in some cases hurriedly trying to arrange transport for their horses. Some, like del Toro and Caitlyn Jenner, did not know the fate of their homes, but the wind-driven wildfire has destroyed the home of “Dr. Strange” director Scott Derrickson and the historic Paramount Ranch where shows like HBO’s “Westworld” and “Dr. Quinn, Medicine Woman” were filmed.

The blaze started Thursday night and by Friday had pushed toward Malibu and the Pacific Ocean, prompting evacuations in Malibu, Calabasas, Agoura Hills and other nearby areas.

Alyssa Milano said her home was “in jeopardy” amid her attempts to safely evacuate her five horses. The actress ultimately got the help she needed and tweeted that her horses were safe. “My children are safe. … Everything with a heartbeat is safe.”

The celebrity website TMZ reported that Jenner’s home was burned, but the Olympic gold medalist said in an Instagram video that she didn’t know “whether the house made it or not.” She confirmed she was safe.

Kardashian West posted video on Instagram of an area on fire with a message “Pray for Calabasas.” She said she landed back home, spent one hour packing and evacuated shortly afterward.

Gaga also took to social media letting her followers know she evacuated Friday morning as she shared a few videos focused on the smoke-filled skies. The singer said she is “sending my prayers” to everyone impacted by the fire.

Derrickson said he is safe despite losing his home.

Cher is concerned about her house in Malibu, an area where the actress-singer has lived for more than 45 years.

“I’m worried about my house, but there is nothing I can do,” she tweeted. “Friends houses have burned. I can’t bear the thought of there being no Malibu I’ve had a house in Malibu since 1972.”

In addition to dozens of homes destroyed, Paramount Ranch’s “Western Town,” a landmark film location that included a jail, hotel and saloon, had burned to the ground.

The ranch served as a location for productions ranging from 1938’s “The Adventures of Marco Polo” to TV shows “The Mentalist” and “Weeds.” The set in the mountains west of Los Angeles dates to 1927 when Paramount Pictures leased the ranch and began making films there.

Western Town specifically was built for TV productions in the 1950s and was used for such westerns as “The Cisco Kid” and “Dick Powell’s Zane Grey Theatre.”

Filming continued for decades even as the ranch changed hands. It was acquired by the National Park Service in 1980 but has continued to function as a filming location, serving as a location for the first two seasons of the sci-fi series “Westworld.” HBO said it did not know the extent of the damage and expressed concern for “all those affected by these horrible fires.”

When not in use for filming, visitors could stroll through Western Town while hiking or riding through on horseback.

Actor James Woods asked nearly 2 million of his Twitter followers to use the hashtag #CampFireJamesWoods to help share names of those who are missing in a separate wildfire in Northern California that has claimed five lives.

He also tweeted resources for horse owners to have their animals evacuated from the Southern California blaze, and called Milano’s report that her family and horses had been evacuated “good news.”

Woods was not among those displaced — he tweeted that he was on the East Coast.