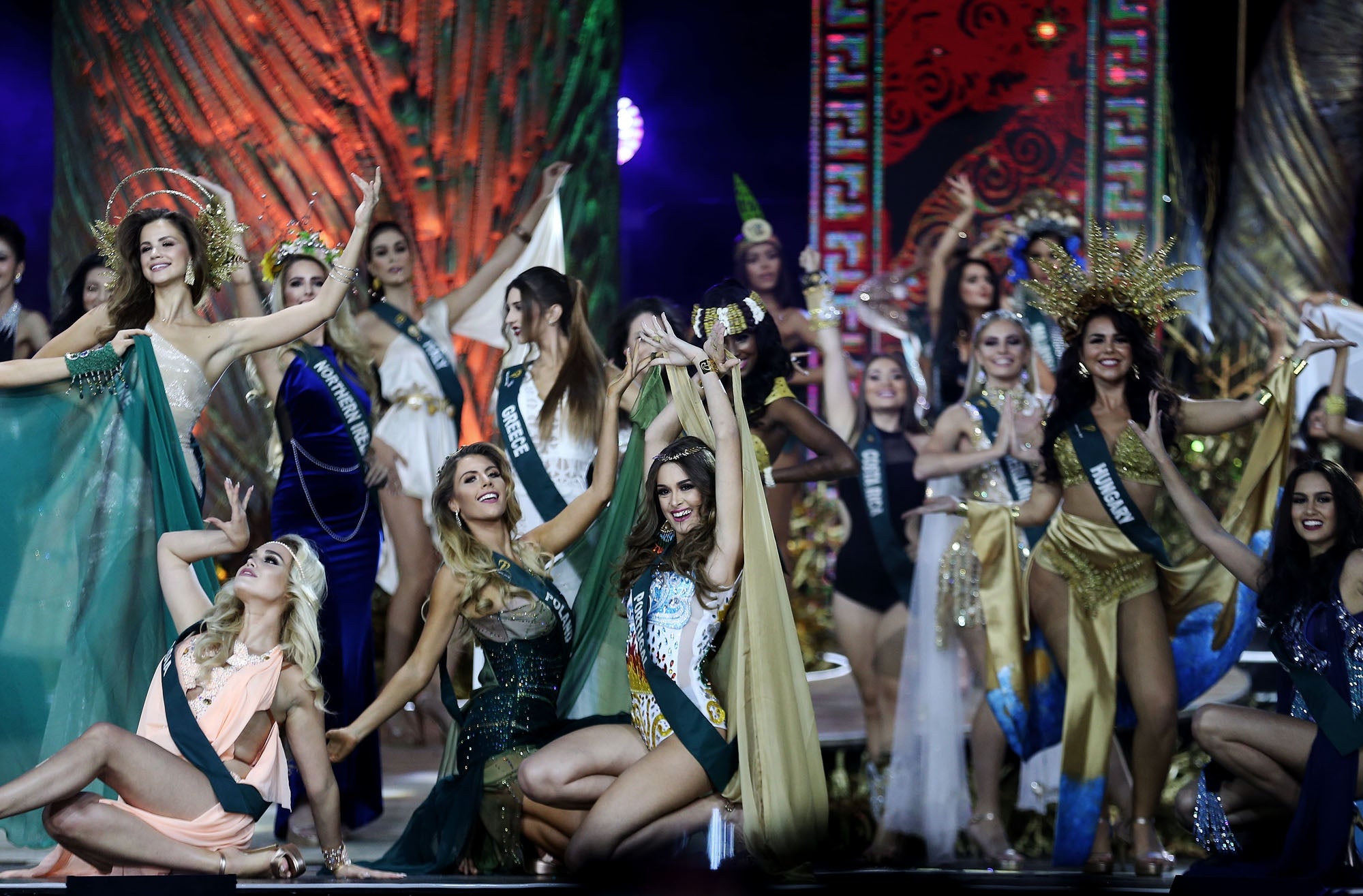 CROWNING MOMENT Glitz and glamor light up the Miss Earth coronation night on Nov. 3 at SM Mall of Asia Arena in Pasay City. —RICHARD A. REYES

The company that organized the recent staging of Miss Earth beauty pageant in the country has encouraged more contestants to come forward if they also experienced sexual harassment during the competition, after three delegates took to social media earlier this week to complain.

“The Miss Earth organization does not condone or tolerate any rude or immoral behavior toward the delegates by sponsors or anybody for that matter. I immediately instructed our project director to ban the alleged perpetrator from all further functions and events,” said Lorraine Schuck, executive vice president of Carousel Productions Inc.

All the delegates were asked to submit a written statement “to enable me to find out directly from them if they experienced a similar incident so we could take appropriate action. I also wanted to find out if any of the other delegates could corroborate the complaint of Miss Canada and Miss England so we could use the statements to help the two in case they decide to file a case against the alleged harasser,” Schuck said in a statement issued on Thursday night.

Three candidates—Miss Canada Jaime Vandenberg, Miss England Abbey-Anne Gyles-Brown and Miss Guam  Emma Mae Sheedy—shared on social media this week how a pageant sponsor—later identified by Sheedy as businessman Amado S. Cruz—allegedly made sexual advances on them, and made them feel “unsafe” and “uncomfortable.”

Cruz, whose social media account described him as president of New Qualitrans Inc., a car rental company, and CEO/president of Offshore Construction and Development Co., has been a longtime sponsor of the pageant.

On her Instagram account, Vandenberg said she left the competition because she “did not feel safe” after a sponsor stalked her and insinuated that sexual favors would improve her chances in the competition.

Gyles-Brown followed suit and also posted on Instagram that half of her good experiences in the pageant “was overshadowed by feeling exploited, vulnerable, unnerved and sexually harassed” by a certain pageant sponsor.

Sheedy said on her Instagram account: “A specific sponsor from the Manila Yacht Club would change the way I see pageantry and sponsors. The sponsor [whose] name is Amado S. Cruz became a problem for many of the delegates, including myself.”

She added: “Cruz grabbed my bare backside at the national costume competition where I was able to push him away, but he consistently told me not to tell anyone about any of the instances.”

The three said they initially told their team managers about the incidents and, when nothing happened, directed their complaint to Schuck. But although Schuck had promised to banish Cruz from the remaining events in the competition, he was still present until the coronation night, they added.

Schuck said she was made aware of the complaints by the “team managers” who took care of the women and that she talked to Gyles-Brown on the phone to verify what was reported to her. “I believe her [account],” she said.

Schuck said Cruz also “corroborated” Gyles-Brown’s story that he indeed approached her to ask if she wanted to see Boracay. She then told him of the organization’s decision to ban him from the event. “I told him some of the girls were not comfortable. He cannot be around them.” He felt bad because he believed he “did not do anything wrong,” she added.

Schuck also bewailed that the three candidates had raised their concerns on social media instead of directing them to her.

“That [Instagram statement] was not what Miss England told me. If she had told me what she said on Instagram, I would have freaked out,” she said.

On allegations that Cruz still showed up in several pageant events despite complaints against him being brought to Carousel’s attention, Schuck said she did not have any control in public places, such as the hotels where the candidates were staying and the Arena where the final ceremonies were held.

Schuck also clarified reports that the organizers confiscated the delegates’ passports. “We [held] them for safekeeping and to facilitate the delegates’ check-in for flights and hotel accommodations. The delegates [were] free to keep their passports if they want[ed] to.”

Several candidates have denied knowledge of sexual harassment incidents in the pageant.

Katherine McClure, Canada’s representative in 2005, said she “was never personally harassed or otherwise coerced to do anything of a sexual nature in my time.”

But McClure acknowledged that “most women faced some level of sexual harassment or coercion at some point … relating to sponsors.”

“There was an unwritten rule in pageantry regarding sponsors. They’re the bread and butter and so your job is to keep them happy,” she said. “Their favorites are boosted in the rankings and if you fall from their grace you plummet. This has never been explicitly said to me … but we all knew that it was expected because it only makes sense, don’t bite the hand that feeds you.”

Meanwhile, Manila Yacht Club (MYC) clarified that Cruz was not a member of MYC, where he sponsored a dinner for the beauty queens on Oct. 14. He may have been sponsored by a club member so he could hold the event there, it said.