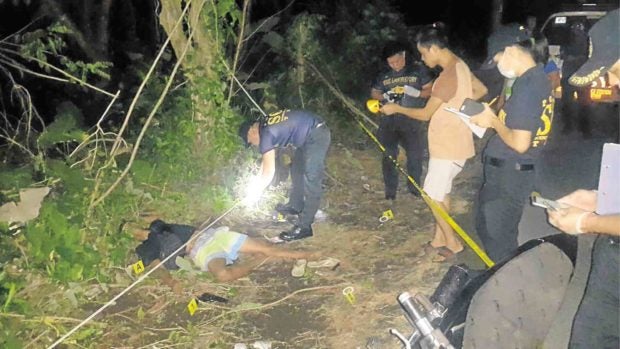 SAN PEDRO CITY — A series of police operations targeting suspected criminals and illegal drug traders killed 13 people from Wednesday to Thursday in the provinces of Laguna and Quezon, police said.

Reports from the Calabarzon (Cavite, Laguna, Batangas, Rizal and Quezon) regional police said the shootouts erupted after the suspects, most of them involved in illegal drugs, resisted arrest.

In a telephone interview on Thursday, Chief Insp. Jojo Sabeniano, Laguna police spokesperson, said the big number of fatalities within a 24-hour period in the province only proved that drug suspects were “armed and dangerous” and ready to fight back.

“It’s a result of an intensified and intelligence-driven operation,” Sabeniano said.

In Los Baños town, a man identified only as Noli was killed in a drug bust at 1 a.m.  Thursday at Barangay Timugan. Police recovered a sachet of suspected “shabu” (crystal meth), a handgun and a motorcycle.

In Sta. Cruz town, Louie Dizon, a resident of Barangay Santisima, was killed in a shootout with policemen after a drug bust at 2 p.m.

In Nagcarlan town, a suspect identified only as Irilo and his unidentified companion were killed at 11 p.m. Wednesday in Barangay Yucos.

Irilo allegedly sold a sachet of shabu to undercover policeman Danny Piol but during the transaction, the suspect drew his gun and fired at Piol, who was hit in the leg. This prompted the policeman’s colleagues to return fire, killing Irilo and his companion.

In Calamba City, drug suspect Resel Ortega was killed in a shootout with policemen at 8:30 p.m. in Barangay Turbina.

In the same city, Miguel Centeno was killed in a drug bust at Barangay Parian at 1:30 p.m. Thursday.

Police recovered a .45-caliber gun and a sachet of suspected shabu from Centeno.

Reports said Strell, who was on the police’s drug watch list, shot a policeman four times in the chest, prompting another policeman to shoot back, hitting Strell twice.

The police officer, who was wearing a bulletproof vest, was unhurt while Strell died hours later in a hospital.

In Bay town, Isagani Rivera and his companion known only as “Toothpick” tried to sell guns to undercover policemen but fired at the lawmen during the transaction in Barangay Dila at 3 a.m. Thursday.

Policemen returned fire and killed Toothpick. Rivera, however, escaped on a motorcycle during the gunfight.

In Cabuyao City, an unidentified man was killed at 5 a.m. Thursday at Barangay Banlic.

According to the police, village watchmen noticed the suspect and his companion driving around the village on a motorcycle.

Thought to be thieves, village officials sought help from the city police. The suspects, however, fired at policemen when they tried to approach them.

Policemen returned fire, killing one of the suspects. The slain suspect’s companion escaped on a motorcycle. The police recovered a .45-caliber pistol from the scene.

In Lucena City, Neil Arangoste sold P500 worth of shabu to an undercover policeman inside his house at Barangay Dalahican on Wednesday noon.

But when the policeman tried to arrest him, Arangoste ran to his bedroom and took a .38-caliber revolver.

Arangoste then fired at the policeman but missed. Another policeman returned fire, killing Arangoste instantly.

Another drug suspect, Edilberto Pacheco, was killed in a shootout with a policeman who tried to arrest him in his house at Barangay Ibabang Dupay at 10:30 a.m. Thursday. —WITH A REPORT FROM DELFIN MALLARI JR.