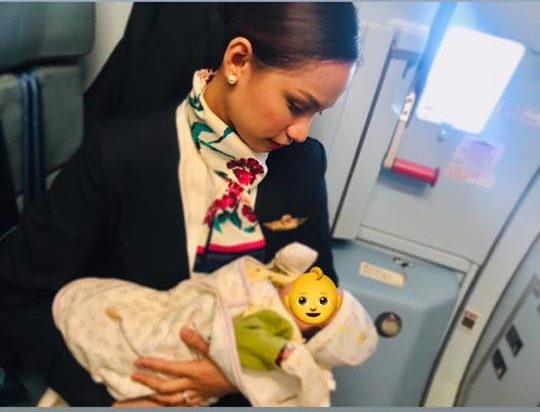 A Filipina flight attendant came to a passenger’s rescue when she offered to breastfeed the latter’s baby inflight.

In her Facebook post, stewardess Patrisha Organo said she heard a faint cry of an infant as their Philippine Airlines (PAL) domestic flight took off early morning of November 6.

The PAL flight attendant noted the baby’s sob was “a cry that will make you want to do anything to help.” And so she approached the mother, who came all the way from the North and was traveling alone, and asked if everything was okay.

“I tried to tell her to feed her hungry child. Teary-eyed, she told me that she ran out of formula milk. Passengers started looking and staring at the tiny, fragile crying infant,” Organo wrote.

“I felt a pinch in my heart. There’s no formula milk onboard,” she added.

In spite of her scheduled “check flight” that day, Organo’s motherly instinct prevailed. An advocate of breastfeeding, she offered her own milk to nourish the baby and lessen the worries of the infant’s upset mother.

Organo said her line administrator, Sheryl Villaflor, then assisted the mother to the plane’s gallery where the stewardess breastfed the baby.

“The baby started rooting, she was so hungry,” she wrote. “I saw the relief on her mother’s eyes. I continued to feed the baby until she fell asleep.”

After the baby was satisfied, Organo escorted the mother and child back to their seat. The infant’s mother “sincerely” thanked the 24-year-old flight attendant, herself a first-time mom to a 9-month-old daughter.

I BREASTFED A STRANGER’S BABY INFLIGHTYesteday, I was scheduled for a check flight to be qualified as a Cabin Crew…

“More than inspired, I have a mother’s heart that knows what the baby needs,” she gushed.

“I was right, the flight’s gonna be special, so special not only because I got qualified as an Evaluator but I got to help,” she wrote.

“I breastfed a stranger’s baby inflight,” she added.

As of this posting, Organo’s Facebook entry has garnered over 91,000 reactions, 17, 629 shares, and over 3,500 comments. with reports from Katrina Hallare /kga