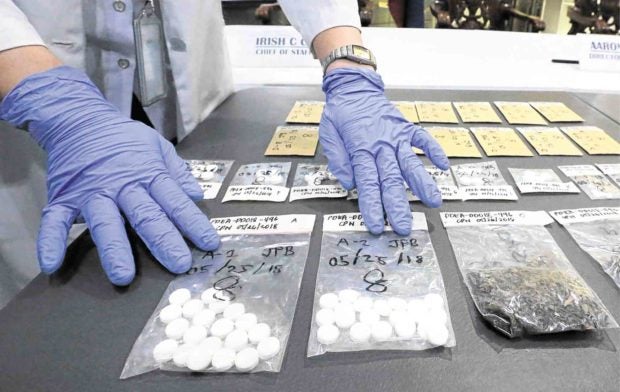 Pricey drugs are among those seized from two suspects during a buy-bust operation at an exclusive subdivision in Muntinlupa City. INQUIRER FILE / GRIG C. MONTEGRANDE

The net satisfaction rating of the Duterte administration’s crackdown on illegal drugs slightly decreased in the third quarter of 2018, but remained within the “very good” bracket, a Social Weather Stations (SWS) survey showed.

The survey conducted from September 15 to 23 showed the net satisfaction rating of the government’s illegal drug campaign going down to +64, with 76 percent of the respondents saying they were “satisfied” while 12 percent were dissatisfied.

The +64 net rating in September is a one-point decrease from the +65 in June. With the survey’s margin of error of ±3 percent, the results are statistically unchanged.

The polling body said the decrease in the nationwide net rating came from a decrease in ratings in Mindanao and Metro Manila, combined with increases in Balance Luzon and the Visayas.

Despite the decrease in points, the net satisfaction in Mindanao and Metro Manila remained “excellent” and “very good,” respectively.

Satisfaction with the administration’s campaign against illegal drugs received a +76 or “excellent” net rating when it was first surveyed in September 2016. It was highest in December 2016 with a rating of +77.