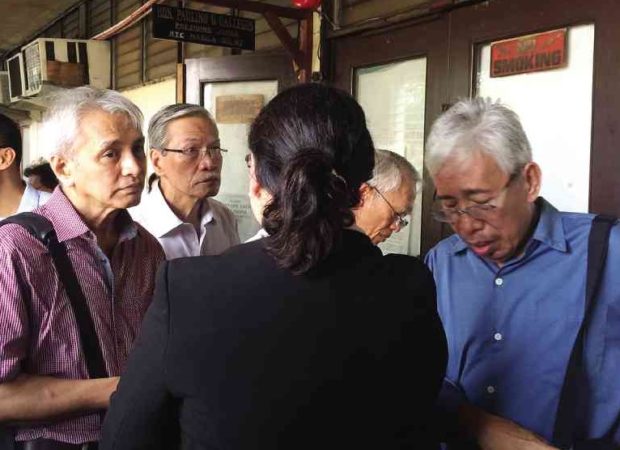 National Democratic Front of the Philippines consultant Vic Ladlad was arrested by the police, his wife Fides Lim claimed in a Facebook post on Thursday.

“My husband Vic Ladlad was arrested… based on a text I got,” Lim said.

“Yes, arrested with two others with their high powered firearms and explosives,” he said in a text message.

The PNP said Ladlad was captured in a joint operation by the police and the Armed Forces of the Philippines.

Lim said Ladlad was arrested with a couple in Doña Tomasa in Barangay San Bartolome, Novaliches, in Quezon City

Lim said the CIDG have also tailed her last week.

She said her husband needed medicines “badly” since he had chronic asthma that had degenerated into emphysema.

“Don’t plant any firearms or explosives on him,” she said.

Karapatan condemned the arrest amid the “intensifying attacks” against human rights in the country.

“We condemn the arrest of Ladlad and the Villamor couple, amidst the intensifying attacks against people’s rights and human rights in the Philippines. We deplore the widespread policy and practice of the Duterte regime of filing up trumped up charges against political dissenters,” the group said in a statement.

According to Karapatan, Ladlad’s arrest is a “direct and grave” violation of the Joint Agreement on Safety and Immunity Guarantees, as with the arrest of other peace consultants of the NDFP.

It said NDFP consultants should be immune from arrests and detention and other harassments and attacks.

Karapatan likewise warned the PNP and the Armed Forces of the Philippines to not plant evidence against Ladlad and the two others, as it said they have “grown accustomed” to justify the arrest of peace advocates “based on trumped up criminal charges.” /cbb/muf

Read Next
51% of Filipinos agree with mandatory drug testing in schools
EDITORS' PICK
House energy committee chair Arroyo bats for cheap electricity
How not to retire as an ex-president
Lawmakers eyeing more changes in Maharlika plan
The vivo Y02 is now available in the Philippines for only PHP 5,299
Shop smarter with vivo’s big 12.12 holiday deals
Hidilyn Diaz wins only gold missing from her collection
MOST READ
Don't miss out on the latest news and information.