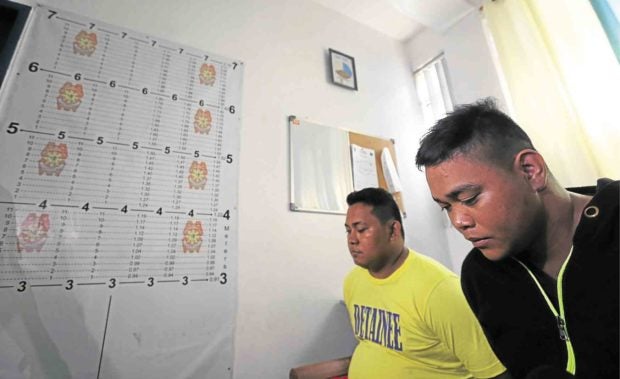 Nearly two weeks after a teenager accused a Manila policeman of forcing her to have sex with him in exchange for her release from jail, another woman made the same allegation against two Quezon City policemen, resulting in the officers’ arrest.

Criminal and administrative charges were filed on Wednesday against Police Officers 1 Jayson Portuguez and Severiano Montalban III, both assigned at the Novaliches station of the Quezon City Police District (QCPD). The two are members of the Tactical Motorcycle Riders (TMR).

Investigation showed that on Friday, the 22-year-old complainant visited her live-in partner at the detention cell of the Novaliches station, following his arrest for illegal gambling.

The following day, she and five other women were arrested for the same offense at Plaza Nova by members of the Novaliches police’s Mobile Patrol Unit and TMR. From there, they were brought to Quezon City General Hospital (QCGH) for the mandatory medical tests prior to detention.

While at the hospital, she approached Montalban and pleaded for her release. In response, Montalban allegedly said that she should “give something in return” and have sex with him.

Out of fear, the woman said she gave in to Montalban’s demand — inside a QCPD patrol car that was parked at a dimly-lit area within the hospital compound.

She was later handed over to Portuguez, who also allegedly forced himself on her.

The victim said she was later dropped off at Novaliches proper, while the five other women arrested with her were brought to the police station.

On Monday night, the woman sought help from the Women and Children’s Protection Desk of the National Capital Regional Police Office (NCRPO).

The following day, the NCRPO’s special operations unit arrested Portuguez, 29, after the victim positively identified him in a police lineup. Montalban, 31, surrendered later that day.

Following their arrest, Portuguez and Montalban, who both entered the police service in 2012, were charged with violation of the Anti-Rape Law of 1997 and grave misconduct.

NCRPO chief, Director Guillermo Eleazar, said the timing of the case came “at the worst time.”

“Critics are still lashing out at the (police) organization over a recent rape incident involving a policeman whom we arrested. Now comes this (new case), as if confirming what they are saying,” Eleazar said in exasperation.

Earlier, the nongovernment organization Coalition Against Trafficking in Women-Asia Pacific (CATW-AP) said it had been a common practice among errant policemen to demand sex from women who were facing cases in exchange for their release.

This sex-for-freedom scheme, according to CATW-AP executive director Jean Enriquez, had even become more rampant under the government’s war on drugs “because now, death is a possibility. It’s worse [because the police] can kill you or your relatives.”

He said this was the first time he had heard of the scheme, called “palit-puri” in street lingo.

Albayalde described as “a very isolated case” the rape charge hurled at PO1 Eduardo Valencia of the Manila Police District, who allegedly forced a 15-year-old drug suspect into sex in exchange for her freedom.