Anger in France as six killed in Marseille building collapse 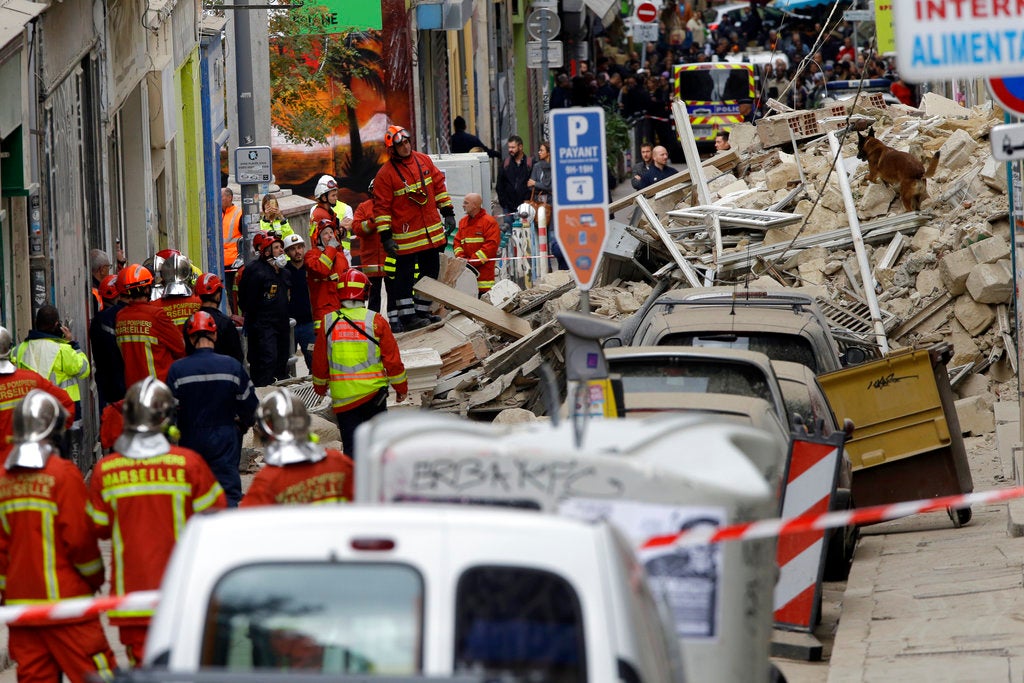 Firefighters work at the scene where a building collapsed In Marseille, southern France, Monday, Nov. 5, 2018. A building collapsed in the southern city of Marseille on Monday, leaving a giant pile of rubble and beams. There was no immediate word on any casualties. (AP Photo/Claude Paris)

Marseille, France – A sixth body was found Wednesday in the wreckage of two dilapidated buildings that collapsed in the French city of Marseille, where furious residents have accused authorities of ignoring warnings about the state of housing for the poorest.

Officials have vowed to inspect all buildings in the southern city deemed “unsuitable” for habitation, two days after the apartment blocks collapsed in a disaster rare for a major European city.

As many as eight people are feared to have been killed when the buildings crumbled on Monday morning in Noailles, a working-class district in the heart of the Mediterranean port city.

After searching the rubble through a second night, rescuers have retrieved the bodies of four men and two women, prosecutor Xavier Tarabeux told AFP.

“We’re working hard, so there’s still hope,” a rescue worker told AFP at dawn on Wednesday as his team continued to search the wreckage with sniffer dogs.

But Interior Minister Christophe Castaner had already warned on Monday evening that there was “little chance of finding air pockets” in a pile of rubble stretching 15 meters (50 feet) long.

The delicacy of the operation – and the fragility of the buildings – became clear when a third adjoining block partially collapsed on Monday evening.

‘People died for nothing’

Google Maps images taken in recent months showed large cracks in the facades of the buildings, only one of which was occupied.

The two on either side were in such a bad state that they had been declared off limits and boarded up.

Residents said structural problems with the buildings on the narrow shopping street were widely known, but that city officials did little when alerted about them.

“Everybody knew about the problems,” said Patrick Lacoste, a spokesman for a local housing action group. “People died for nothing.”

Sophie Dorbeaux meanwhile told AFP she had left the now-demolished block on Sunday night to stay with her parents because her door, like several others, was not opening or closing properly.

“The walls had been moving for several weeks and cracks had appeared,” the 25-year-old philosophy student said.

“It could have been me,” she added, visibly shaken.

Castaner told lawmakers in Paris on Tuesday that he had ordered a building-by-building audit before an “ambitious program for ensuring safe conditions” along with Marseille authorities.

“Nearly 6,000 properties have been identified as at risk” in the city, he said, representing some 44,000 lodgings in lower-class neighborhoods.

Marseille city authorities, who have evacuated and rehoused 100 residents from nearby buildings, believe heavy rain may have contributed to the collapse.

The neighborhood struck by the disaster is home to many buildings in a similarly dilapidated condition, some of them run by slum landlords.

Marseille authorities began a vast upgrade plan for the city center in 2011.

But a 2015 government report said about 100,000 Marseille residents were living in housing that was dangerous to their health or security.

“It’s unthinkable that such things happen in our time,” said Christian Gouverneur, who owns a flat across the road from the disaster site.  /kga