Pilots’ penis-shaped flight path gets them in trouble | Inquirer News

Pilots’ penis-shaped flight path gets them in trouble 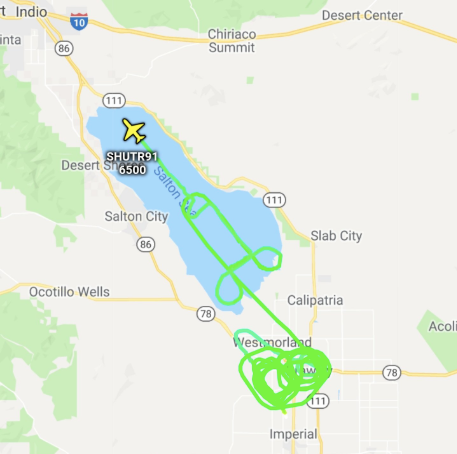 The United States Marine Corps stated that it has grounded the two pilots allegedly involved in a penis-shaped flight pattern drawn by a T-34C Turbomentor in Palm Springs, California last month.

“The T-34C crew that are being investigated for flying a pattern resembling an obscene image are currently not flying pending the results of an ongoing investigation,” spokesperson Major Josef Patterson told Washington Examiner yesterday, Nov. 6.

The Marine Corps will determine the appropriate disciplinary or administrative action for the two pilots once the investigation on the matter is finished, the report said.

“Somebody needs to have a word with the crew of US Navy T-34C,” the tracking account stated.

Somebody needs to have a word with the crew of US Navy T-34C 160937 SHUTR91 out of MCAS Miramar 😂😂 pic.twitter.com/WgrgkKzRln

The post, which had gone viral, caught the attention of the authorities. It was later discovered that the aircraft used by the pilots is part of the 3rd Marine Aircraft Wing based out of Marine Corps Air Station Miramar in San Diego, as per report.

Last year, the same publication reported that the U.S. Navy issued a public apology after two of its pilot drew a penis over Okanogan County, Washington, with an EA-18G Growler jet. The Navy pilots involved were grounded and consequently disciplined. Kate Matriano/JB