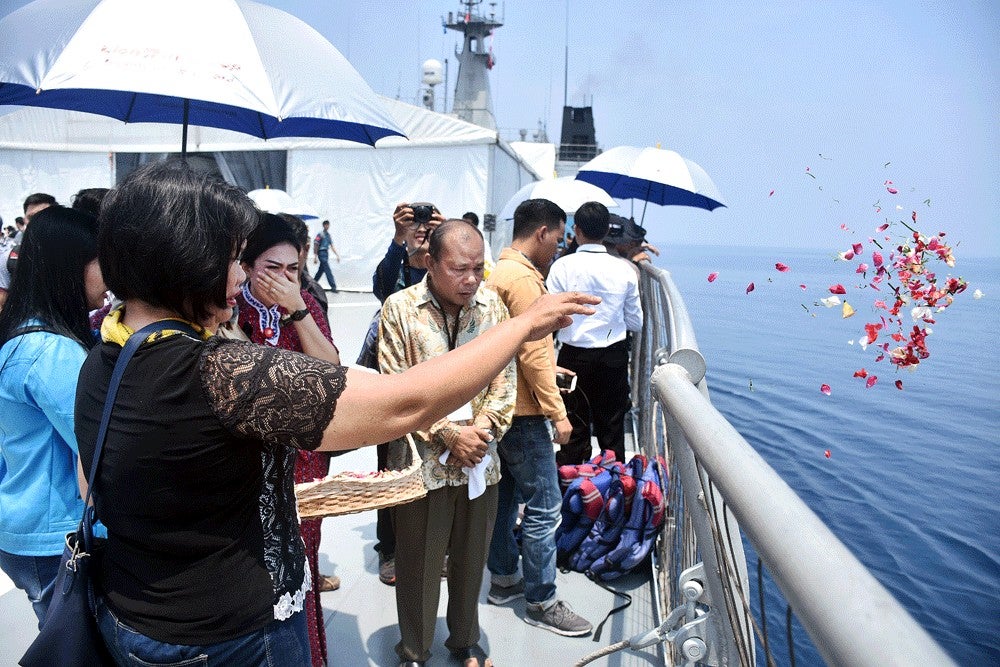 A time to remember: Family members of the Lion Air flight JT610 crash victims scatter flowers from the deck of KRI Banjar Masin into the sea near Karawang, West Java, in a ceremony held on Tuesday to pray for their loved ones. THE JAKARTA POST

JAKARTA — Fifty-year-old Rendra Hertiadhi seemed completely at ease while lounging on a stretcher under the scorching sun.

Most people would immediately seek shelter from the heat, or at least wriggle restlessly on a stretcher typically used to carry the injured and dead bodies.

Such an inclination for convenience did not seem to apply to Rendra, a seasoned underwater diver who would remain comfortable under any circumstances if it meant he could save lives.

“Most people seem puzzled when I tell them I volunteered to take part in dangerous search and rescue operations. There’s really no need to be puzzled. Human nature to help others in need should not be seen as an extraordinary thing,” he said.

Rendra is among a group of civilian divers who volunteered to assist a joint search and rescue (SAR) operation for the remaining victims of Lion Air flight JT610, which crashed into the Java Sea last Monday with 189 people on board.

Upon hearing the news of the tragic accident, Rendra said he immediately called his connections at the National Search and Rescue Agency (Basarnas) to ask whether civilian assistance was required.

A senior member of the Indonesia Divers civilian diving community, Rendra considered himself privileged to be involved in various opportunities to serve humanitarian causes.

Though he is eager to take part in such search efforts, he conceded that the actual field work was anything but easy.

During the Lion Air operation, which required divers to descend 32 meters into the Java Sea, Rendra said he had to pay special attention to the gas mix in his oxygen tank so as to not become asphyxiated.

“Inhaling too much oxygen at any depths below 18 m could cause oxygen poisoning, which would result in hallucinations and eventually death,” he said.

Syachrul Anto, a former member of Indonesia Divers who also served as a volunteer for the Lion Air search, died last Friday while ascending to the surface.

According to a preliminary medical investigation, Syachrul died from decompression — a drastic change in water pressure caused by a sudden shift in water depths. Basarnas has since declared him a humanitarian hero.In addition to physical challenges, Rendra said thick mud on the ocean floor had also hampered search efforts by possibly concealing human body parts and debris from the plane.

“I had to resist the temptation to dig into the seabed as it would only muddy up the water and reduce visibility,” he said.

Rendra also took part in the search mission for victims of AirAsia flight 8501, which crashed into the Java Sea in December 2014. He said the AirAsia evacuation was relatively less challenging as the ocean floor had mostly consisted of unobtrusive sand.

“The only thing that never changes in these kinds of rescue missions is the sight of lifeless human bodies. It disturbed me once. But nowadays, I personally see [rescue operations] as an invaluable opportunity for me to redeem my sins,” he said.

Civilian divers taking part in such missions are coordinated by the search and rescue unit of Basarnas, which has only about 3,600 personnel serving across the country.

The division outsources skilled search and rescue divers from various institutions such as the Transportation Ministry and the Indonesian Military (TNI), as well as civilian communities such as Indonesia Divers.

“We never call them when we need their help; they are always the first ones to reach out to us and volunteer.”

As of Tuesday, Basarnas has deployed 176 outsourced divers to locate and retrieve the remaining crash victims.

Basarnas operations deputy Nugroho Budi Wiryanto said 184 body bags had been retrieved as of Tuesday evening. The Kramat Jati Police Hospital, meanwhile, has identified 44 passengers from the retrieved bodies, 33 of whom are male and 11 female.

The victims’ families participated in a mass prayer on board two Navy ships in the Java Sea on Tuesday morning, a day before Basarnas is set to decide whether it would extend the search for the remaining victims and the cockpit voice recorder (CVR).