In Bulacan, no houses left for Kadamay 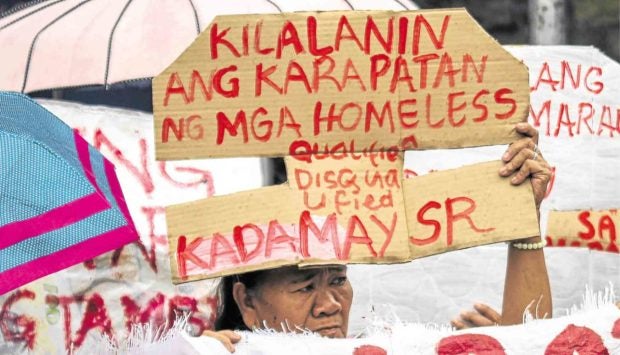 HOUSING WOES A woman joins a Kadamay protest rally at the National Housing Authority office in Quezon City to ask the government to solve the country’s problems on housing. —JAM STA. ROSA

CITY OF MALOLOS — There are no more houses for members of the urban poor group Kalipunan ng Damayang Mahihirap (Kadamay) at government housing projects in Bocaue and Norzagaray towns in Bulacan province.

About 200 Kadamay members marched to the Bocaue and Norzagaray municipal halls on Monday to apply for the houses but were told that the 4,000 units at Bocaue Hills in Barangay Batia in Bocaue had been occupied and those in Norzagaray had been distributed to the town’s informal settlers.

Under a resolution issued by Congress this year, the National Housing Authority (NHA) was authorized to award to qualified applicants all low-cost housing units which had been canceled or given up by their original beneficiaries, most of them soldiers, policemen, firemen and jail personnel.

The Bocaue government had accepted the applications of Kadamay members that would be sent to the NHA, but these would be vetted because of concerns that some of them had acquired units at other housing sites and had sold these, according to Mayor Joni Villanueva-Tugna.

She said 1,000 families in Bocaue had applied for units with the NHA, and 400 of them would soon avail themselves of housing loans.

In Norzagaray, Mayor Geronimo Cristobal said Kadamay applications were submitted late and the local government had distributed all of the units at St. Matthew Homes, Norzagaray Homes and Norzagaray Heights to informal settlers.

Kadamay said their members who submitted their applications were homeless residents of the two towns. 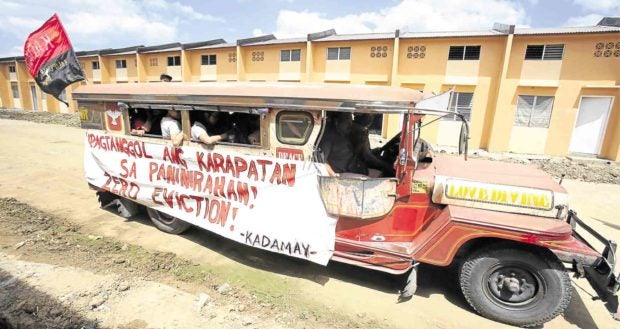 “With the passage of the resolution, the most underprivileged citizens should be prioritized,” said Gloria Arellano, Kadamay chair.

In March last year, Kadamay led close to 8,000 people who forcibly occupied about 5,000 idle units at five NHA projects in Bulacan that were intended for uniformed personnel.

President Duterte at that time encouraged the policemen and soldiers to give up their claims to the houses to prevent a violent clash should the government force to evict Kadamay members. He also promised to build better homes for the uniformed personnel.

But on Oct. 30 in Davao City, Mr. Duterte warned Kadamay and other illegal settlers that he would order their arrest if they would take over more housing projects.

“If you resist violently, then my order to my soldiers and policemen is just simply to shoot. And if [the authorities] are in danger, shoot them dead,” Mr. Duterte had said. —CARMELA REYES-ESTROPE