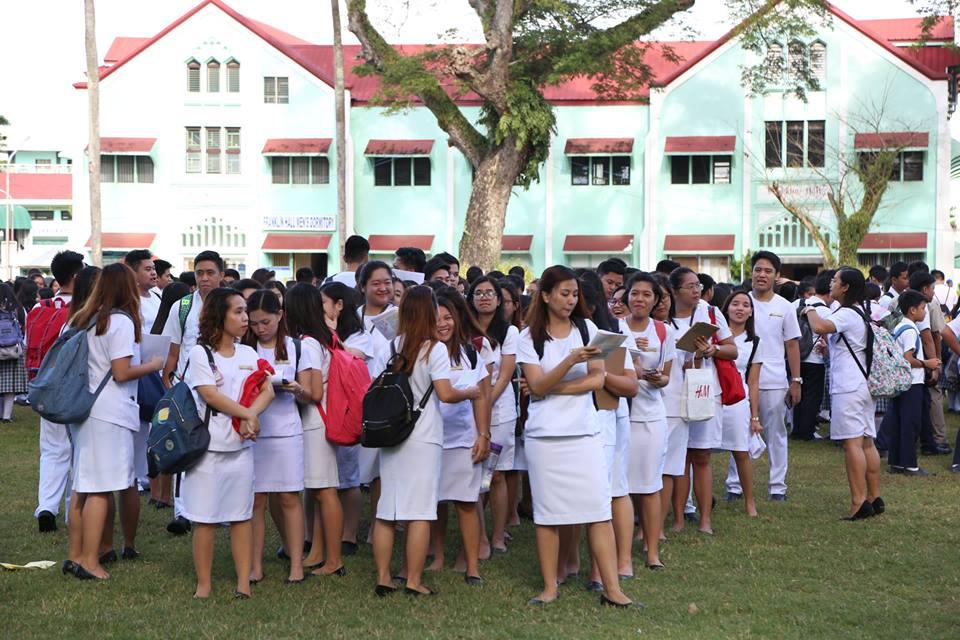 College students of the Central Philippine University (CPU) in Jaro, Iloilo City wait at their football field during the first earthquake of intensity 4.7 that struck at 7:45 a.m. with epicenter at San Jose de Buenavista in Antique. A second stronger earthquake at intensity 4.8 happened at 10:54 a.m. with Guimbal, Iloilo as epicenter. Photo credits: CPU Educational Media Center (EMC)

ILOILO City – Monday was the 4th Quarter National Simultaneous Earthquake Drill but two actual earthquakes in Panay Island and another in Guimaras sent people scurrying out of buildings and into open spaces, with others in the upper floors of buildings doing the duck-cover-hold safety measure.

A lesser intensity earthquake of 4.0 with epicenter at Sibunag, Guimaras happened at 7:46 a.m., which had buildings “slightly tilting” and the old sugar bulk structure at the pier of Jordan shaking, said Jaypee Kein Entredicho, information officer of Guimaras.

About 30 minutes after the second earthquake, Iloilo City Mayor Jose Espinosa III closed City Hall for the day and suspended classes in all levels in public and private schools and left it to the discretion of private companies and national government agencies to declare the suspension of work.

As of this posting, the Philhealth Region 6 office said work would resume tomorrow, while in Iloilo, the town of Miagao also suspended classes in all levels. Other government offices and towns have yet to announce suspensions.

On the other hand, 30 minutes after the second quake, engineers of the Iloilo Provincial Capitol inspected the huge three-story edifice after employees reported hearing loud noise in an unspecified area and were not allowed back for fear of aftershocks.

The tremors from the first earthquake had buildings swaying, prompting employees to run for cover and teachers ushering their students into open fields like West Visayas State University (WVSU) and Central Philippine University. The students stayed in their football fields for about 30 minutes.

The WVSU administration did not send its elementary pupils back to their classrooms and had them call their parents to fetch them. Those who did not have parents to fetch them stayed in the field with their teachers. It was only after the second earthquake that other schools in the city also suspended classes.

With the suspension of classes, panicky parents picking up their children caused heavy traffic throughout Iloilo City’s major thoroughfares.