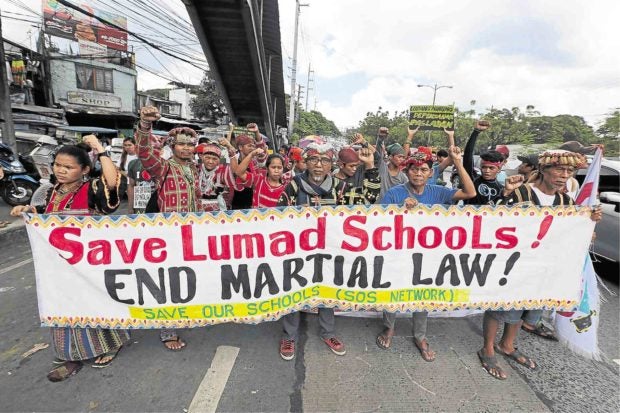 FIGHTING FOR EDUCATION“Lumad” march along Katipunan Avenue in Quezon City in October to protest a military campaign to shut down schools for indigenous peoples in Mindanao. GRIG C. MONTEGRANDE

DAVAO CITY — The mother of a volunteer teacher at a “lumad” (indigenous peoples) school in Compostela Valley province has been abducted, allegedly by the military, to pressure the teacher to turn herself over to authorities as a rebel supporter.

Nolasco said Imelda was forcibly taken by a group of armed men from her residence around 10:30 p.m on Oct. 16 in Mabini town, Compostela Valley.

Soldiers, Nolasco said, had been seen guarding the area where the abduction took place.

Nolasco said in the last two weeks lumad schools belonging to STTICLC had been harassed and a military-backed tribal militia, Alamara, threatened to shut lumad schools in Talaingod town.

The abduction of Imelda was the latest case of harassment, she said.

CTCSM was being linked by the military to the New People’s Army (NPA), the armed component of the Communist Party of the Philippines.

“We don’t force anyone to surrender,” Balagtey said. “We accept voluntary surrender,” he added.

Nolasco said relatives of Imelda met with Stephen Ducusin, head of a militia, to seek help in locating Imelda.

Ducusin denied any knowledge about Imelda’s abduction but told her relatives she was doing fine.

This prompted Imelda’s relatives to suspect that the military had a hand in her abduction.

Nolasco said Ducusin vowed to help locate Imelda, a village health worker, but on condition that Jeany Rose showed up at a meeting with military officers.

The condition, Nolasco said, was relayed to Jeany Rose through a phone call.

Jeany Rose said she believed her mother’s disappearance was linked to the military’s allegation that Jeany Rose was an NPA supporter.

She said in 2002, soldiers from the Army’s 72nd Infantry Battalion raided her house.

The same Army unit raided her house in 2006 and 2010 on suspicion that her family supported the NPA, Jeany Rose said.

Nolasco said the Armed Forces of the Philippines was bent on closing lumad schools being run by STTICLC across Mindanao.

Soldiers and tribal militia men served a notice of closure to all lumad schools in Talaingod town.

But Nolasco said STTICLC questioned the validity of the closure notice.

She said the group believed it was but part of counterinsurgency operations.

In June, lumad schools in Talaingod were subjected to surveillance, prompting volunteer teachers to demand an immediate pullout of troops.

At least 40 soldiers have encamped near the schools in Talaingod, according to Joan Esperancilla, a volunteer teacher.

Soldiers, she said, demanded to see identification cards of teachers and school personnel.

“We are duty bound to educate the next generation of indigenous peoples, a duty which is far greater than ourselves,” she said.

“We simply cannot stop because of harassment and intimidation,” Nolasco added.