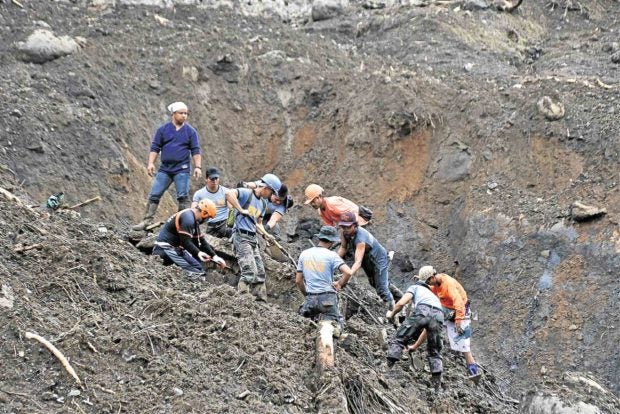 GRIM SEARCH Workers claw through rocks and soil covering structures, including a Department of Public Works and Highways building, following a landslide in the town of Natonin in Mountain Province. —REDJIE CAWIS/CONTRIBUTOR

BAGUIO CITY — Bodies of 11 fatalities have been claimed by their families even as volunteers continue to dig for survivors buried in landslides at Natonin town in Mountain Province.

As of Saturday, search and retrieval operations had recovered the bodies as well as body parts from houses and a Department of Public Works and Highways (DPWH) building, which were dragged 5 kilometers down when boulders smashed a road at Barangay Banawel in Natonin at the height of Typhoon “Rosita” (international name: Yutu) on Oct. 30.

Confirmed dead were Benito Longan and John Tinmakcheg, both of Natonin, Junjun Laron of La Union, Jerry Epan of Ifugao, Elberto Cano of Isabela and Gregorio Castro of Baguio City.

The remains of Joel Arevalo of Bicol, Juanita Longan of Natonin and Virginia Catet Malucay of Mankayan, Benguet, have yet to be brought home by their families.

Two bodies have yet to be identified.

The local disaster relief office has not yet determined whether these bodies belong to members of the Citizens Armed Forces Geographic Unit based in Ifugao who took side jobs as laborers in Natonin.

Most of the people inside the collapsed DPWH building were laborers hired to build annexes at the compound of the second district engineering office at Barangay Banawel.

Roads connecting Natonin and Paracelis town in Mountain Province were finally opened by DPWH work crews and heavy equipment were deployed, hastening the recovery of the bodies.

Food and other provisions also reached the town center, which was isolated for days.

Disaster officials were just starting to get a full picture of the damage wrought by Rosita mostly in the north.

As of Saturday, the National Disaster Risk Reduction and Management Council (NDRRMC) already received reports of P131.4 million worth of damage to agriculture in Cagayan Valley region and Cordillera Administrative Region (CAR).

Of this figure, Cagayan suffered P85 million in losses and the Cordilleras, P46.4 million.

The NDRRMC also said at least 7,861 houses had been reported damaged by the typhoon in the regions of Ilocos, Cagayan, Central Luzon, the Cordilleras and Eastern Visayas.

Earlier, the Department of Social Welfare and Development (DSWD) said 229,846 persons were displaced or suffered financial losses in these regions.

As of Saturday, the DSWD said 466 persons were still sheltered in 15 evacuation centers, most of which were in CAR.

The NDRRMC said P18 million worth of aid so far had been sent to storm survivors. —Kimberlie Quitasol with a report from Jaymee T. Gamil