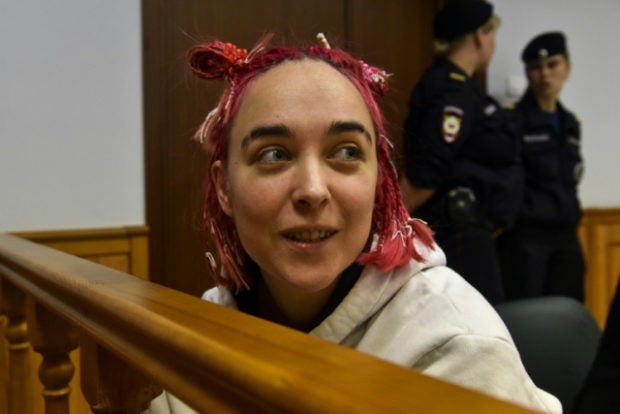 Two members of the Russian group spoke alongside leading Hong Kong democracy activist Joshua Wong at a panel discussion that had been due to accompany the launch of a highly anticipated art show by Chinese political cartoonist Badiucao.

That show was canceled Friday with Hong Kong organizers citing safety concerns due to “threats made by Chinese authorities relating to the artist”.

“We are very sorry to know that things are getting worse here. I think it is very important to be here now just to express our solidarity,” Pussy Riot member Olga Kuracheva said during the packed panel discussion on freedom of art and expression, held at a studio in Hong Kong.

Kuracheva encouraged people to speak out against suppression.

“I would advise people not to be afraid, because one voice is not so much…but voices of solidarity should sound loud,” she told the audience.

Hong Kong has rights unseen on the mainland, protected by an agreement made before the city was handed back to China by Britain in 1997, but there are serious concerns those freedoms are under threat.

There was a major backlash against Hong Kong authorities when they denied a visa without explanation to a Financial Times journalist last month who had chaired a press club talk by a Hong Kong independence activist.

Wong called on members of civil society around the world to share their experiences in order to gain “more bargaining power” in pushing for human rights and freedoms.

Kuracheva and Nikulshina were among four members of Pussy Riot who served a 15-day jail sentence for invading the pitch dressed as police during the football World Cup final in Moscow in July.

The band said it was a protest against Russian leader Vladimir Putin and issued a list of political demands, including freeing political prisoners and ending arrests at peaceful rallies.

In September, a Pussy Riot member was hospitalized with suspected poisoning and has said he believes he was attacked by Russia’s secret service for his attempt to investigate the deaths of three Russian journalists in Africa.

The two Pussy Riot members told the Hong Kong audience that the poisoning was a bid to silence them.

“Sometimes living in Russia is like living in a war and I sometimes think: who’s going be the next?” Kuracheva said. NVG