Lawyers to Sister Fox: ‘You have inspired us immensely’ | Inquirer News

Lawyers to Sister Fox: ‘You have inspired us immensely’ 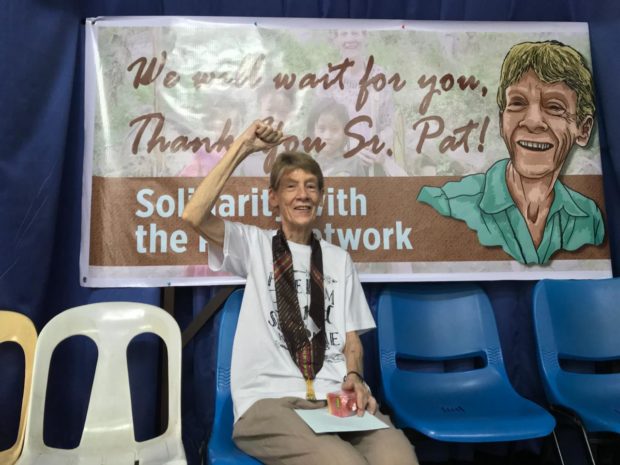 “You have inspired us immensely and taught us many lessons and values we should all have learned in grade school.”

This was the farewell message to Australian missionary Sister Patricia Fox by her lawyers as she prepares to exit the country on Saturday.

“And now it is time to say goodbye. For now. But we will certainly see you again here, there and everywhere, in the factories, in the slums, in the picket lines, in the fields, in the churches and in the streets,” the lawyers said.

The Bureau of Immigration (BI) had allowed Fox to stay in the country for 59 days after her visa status was downgraded to “temporary visitor” with the expiration of her missionary visa on September 5.

“We say farewell for now but we shall await you again with all our hearts and minds as you are leaving your heart and mind with us. Because you will never really leave us,” the lawyers added.

The lawyers also said Fox’s supporters stood with her amid the attacks against her.

“They blinked and fumbled at the start but stuck to their guns to kick you out by all means, many most foul, some pretending to be because the infallible and invincible King said so,” they said. “But your multitude of supporters and instant fans from a broad range of society including the institutional church and the discerning media, and most especially the people’s organizations stood by you.”

“Downgrading reverted her status to a temporary visitor, and she is given 59 days from the day her missionary visa expired, which was September 5,” BI spokesperson Dana Sandoval said in a previous statement.  /muf