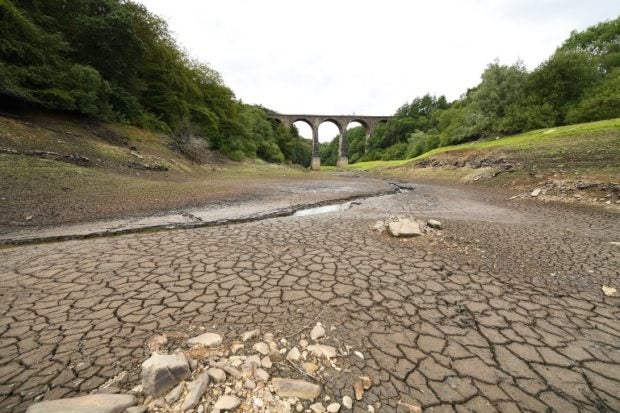 A picture shows a parched section of the Wayoh Reservoir spanned by the Armsgrove Viaduct at Edgworth near Bolton, northwest England, on August 1, 2018 as dry and hot conditions were set to continue in much of Britain during a heatwave in Europe. Britain has experienced its driest first half to a summer on record, with temperatures topping 30 degrees Celsius for several days, according to the Met Office. Wayoh reservoir supplies drinking water to the northwest Town of Bolton in Greater Manchester. AFP FILE PHOTO / Paul ELLIS

According to the Met Office study, the length of warm spells has more than doubled when data for the last 10 years is compared to figures from 1961 to 1990.

It also said Friday that hot summer days in the last 10 years period are on average hotter than during the earlier period.

The Met Office likewise found an increase in the frequency of tropical nights, classified as nights when temperatures do not fall below 68 degrees Fahrenheit (20 degrees Celsius).

The head of the Met Office National Climate Information Center Mark McCarthy said the data provide a “valuable record of the changing climate” in Britain.  /kga