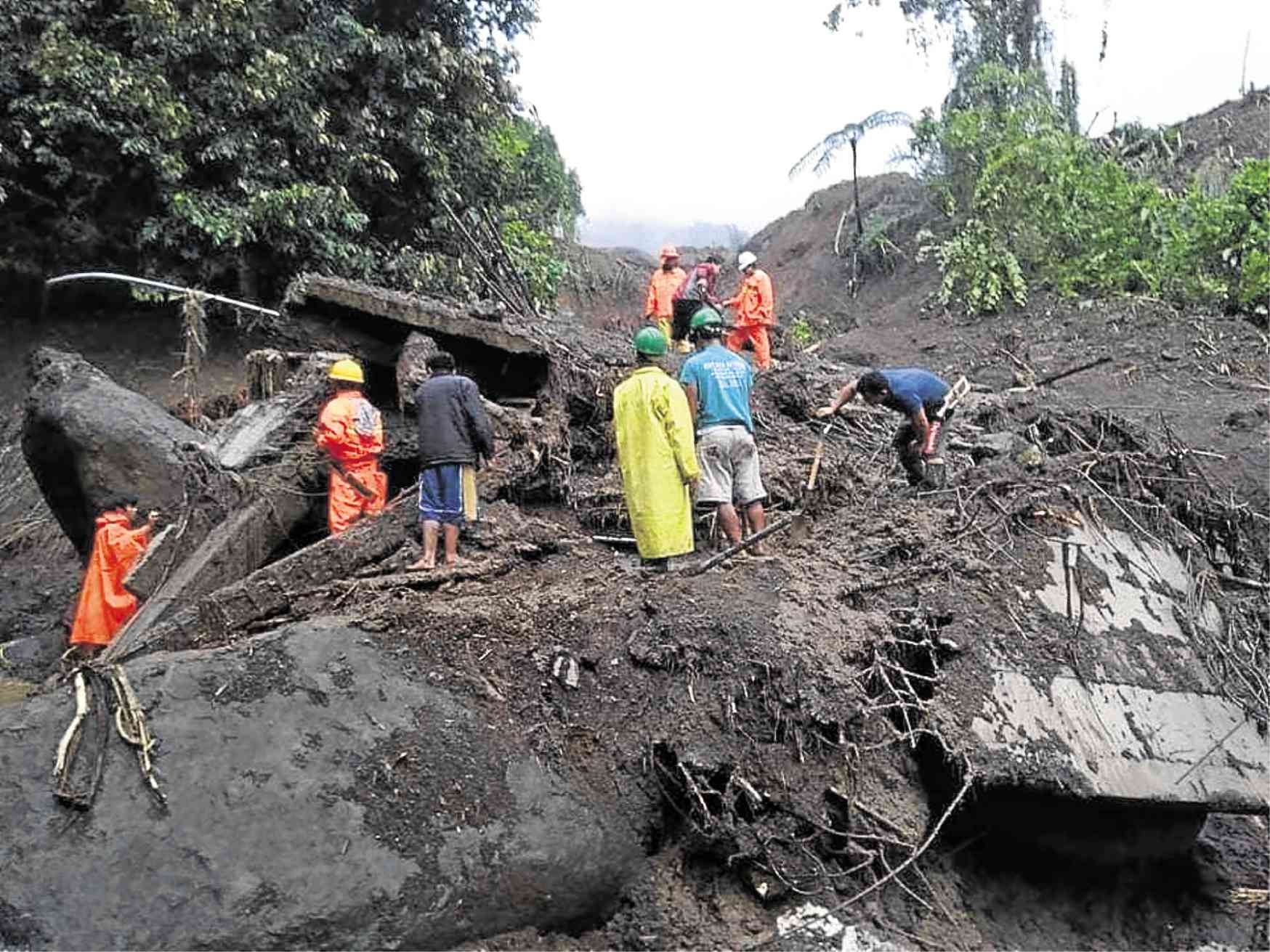 MASSIVE LANDSLIDE Government engineer Junel Emengga says a massive landslide and big boulders came rolling down the mountain, demolishing the DPWH buildings at Barangay Banawel in Natonin town and entombing workers inside at the height of the typhoon’s onslaught on Tuesday.—CONTRIBUTED PHOTO

BAGUIO CITY—Instead of visiting the graves of their departed family members, many residents of Natonin town, Mountain Province, spent All Saints’ Day digging through a landslide in search of survivors and the remains of those killed.

At least 15 people were reported killed in three regions in Luzon, including nine in Natonin. At least 26 are still reported missing in the town.

On Thursday, rescuers pulled out 14 survivors from buildings that were dragged down when a road collapsed, including the municipal engineering office where more than 20 people took shelter when Typhoon “Rosita” (international name: Yutu) struck on Tuesday.

Aside from four bodies recovered from the landslide area at Barangay Banawel, four more bodies were found at a river nearby, said Natonin Councilor Rafael Bulawe, who acted as the town government’s spokesperson.

Rescued were Erwin Hadlucon, Andrew Burillo, Arocan Idot and a man identified only as Amon, all employees of Moment Diagram Builders (MDB), and Oliver and Jezrylyn Lamorca.

Like many Natonin families, rescuers would have been visiting the tombs of families in their backyard on Thursday, Bulawe said.

“It is customary for us to bury our dead in our own property… [But] I was not able to visit my mother today as I have a duty to fulfill. I believe she would understand,” he said.

Around 200 residents, aided by policemen and Army soldiers, have been busy shoveling through mud and rocks.

Among the survivors were laborers putting up the building annexes of the Department of Public Works and Highways (DPWH) in Banawel.

Government geologists were scheduled to conduct a postdisaster assessment of the landslide site.

Initial assessments made via satellite images suggested that the DPWH buildings and the other structures were standing on a gulley beneath a weakened mountainside in Banawel, said Fay Apil, Cordillera director of the Mines and Geosciences Bureau.

She said experts had detected “an old landslide escarpment upslope.”

President Duterte was scheduled to inspect areas in Isabela province ravaged by Rosita on Thursday afternoon, and was expected to make an ocular inspection of the landslide area.

Bulawe said nobody expected this part of the mountain to collapse. “There was a creek there but it was small. The rain that Rosita dumped on the mountain that day was really too much,” he said.

The district engineering offices of Ilocos Norte, Ilocos Sur and La Union provinces deployed equipment and workers to clear roads leading to Mountain Province and Ifugao and help in the search operations in Natonin.

To reach Natonin, the workers had to steer through at least 10 landslides along roads in the capital town Bontoc, it was learned.

Isabela, which is nearer to Natonin, was also struck hard by Rosita and road links there have been severely damaged.

The National Disaster Risk Reduction and Management Council (NDRRMC) is still confirming the death of 15 people in Central Luzon, the Cordillera Administrative Region (CAR) and Calabarzon.

Also being validated is the report that six people were missing in the aftermath of the typhoon.

Among the missing is a fisherman of Mulanay town in Quezon province whose boat capsized on Oct. 29 due to big waves off Perez town.

In a report on Thursday, the NDRRMC reported some 13,700 displaced families, or more than 50,000 people, in the Ilocos region, Cagayan Valley, CAR, Central Luzon and Eastern Visayas.

The evacuees were temporarily housed in 586 evacuation centers in the five regions.

The NDRRMC also reported damage to 955 houses in the five regions.  —REPORTS FROM KIMBERLIE QUITASOL AND VINCENT CABREZA; AND JEANNETTE I. ANDRADE