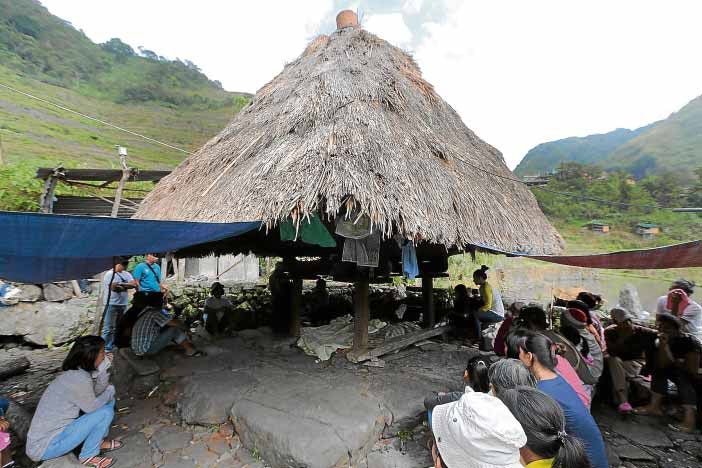 UPLAND MOURNERS Relatives and friends pay their last respects to Baltazar Pinnay and his
preteen daughters Rexibelle, Rhezel and Rydbell, who all died in a landslide that buried their house at Barangay Batad, Banaue town,which is famous for its rice terraces. —GRIG C. MONTEGRANDE

In an instant on early Tuesday afternoon, she lost her husband and three daughters. They were buried alive by mudslide that engulfed their hut at Sitio Hicib.

The whole sitio was in shock, as life at Barangay Batad, famed for its rice terraces that cover a whole mountainside, got disrupted anew by a natural calamity.

At least seven people have been confirmed killed in Ifugao province—five in this town and one each in Alfonso Lista and Asipulo towns, according to the provincial police office in Lagawe town.

After the typhoon struck, residents have to contend with the struggle of going in and out of Barangay Batad.

Landslides rendered the road from the national highway to the village impassable in at least five sites, forcing locals and visitors to take a two-hour hike.

“The place is beautiful, but difficult to get to,” said Swiss tourist Joe Keller, who was among a group of Europeans who walked to Batad on Thursday morning.

The Batad rice terraces is one of the sites in Ifugao on the United Nations  Educational, Scientific and Cultural Organization’s World Heritage List.

From the national road, the 4-kilometer hike to Sitio Saddle is made more difficult as the paved road is littered with rocks and mountain soil, washed downhill by rainwater.

Foot trails going around Batad’s six sitios, are also made circuitous by eroded portions. Others are blocked by fallen tree branches.

Village officials are thankful the typhoon has done minimal damage to the Batad rice terraces, often referred to in tourism postcards as “the amphitheater” and “stairway to heaven.”

But the whole village is mourning the death of the four members of the Pinnay family.

Batad residents are unaware whether the village has been declared a hazard zone by the Mines and Geosciences Bureau, despite many of the houses hanging from cliffs, according to village chief Romeo Heppog, 39.

Rains dumped by Rosita softened the slopes of the terraced mountain and made the water cascade into brooks more intensely.

As a result, a part of the  mountain directly above the Pinnay residence crashed and buried the four family members.

The father, Baltazar Pinnay, used to work as a stone mason on the rice terraces when the government carried out restoration work after Typhoons “Pedring” and “Quiel” eroded several layers of the terraces in 2011.

But the terraces that he helped mend would witness his and his daughters’ deaths.

About five hours after Rosita struck northern Luzon on Tuesday morning, the Pinnays went about their normal activities, thinking the worst was over.

Baltazar was preparing food for the family’s late lunch, while his 11-year-old daughter Rexibelle was painting  her toenails.

Ten-year-old Rhezel was scanning the pages of her notebooks, while Rydbell, 8, was fast asleep.

Rita said she was trying to clear a path of runoff water that was rushing down from higher ground beside their house.

An hour after the mudslide, Baltazar was dug up by rescuers with his face down. He was holding the arms of two of his daughters, in apparent attempt to rescue them.

When Rexibelle’s body was retrieved from the rubble and was cleaned up, her mother saw the design she had painted on her left toenails: white crosses.

Read Next
Senators urge prayers for EJK victims
EDITORS' PICK
Smart releases Hyun Bin’s second TVC
Current dominant strain of COVID-19 more infectious than original—study
Water remains our saving grace right now
DOLE: Return of OFWs’ remains from Saudi to be ‘delayed,’ deadline moved to ‘early next week’
‘Justice will be done,’ Duterte assures as he vowed probe on Jolo incident to bare ‘truth’
EuroMillions Superdraw: A lottery draw unlike any other is coming to the Philippines
MOST READ
BREAKING: Duterte signs anti-terror bill into law
Locsin warns of ‘severest response’ if China’s army drills in SCS ‘spill over’ to PH domain
Duterte to PNP, AFP: I’m pleading for calm, understanding over Sulu incident
Converge ICT applies for P35.9B IPO
Don't miss out on the latest news and information.