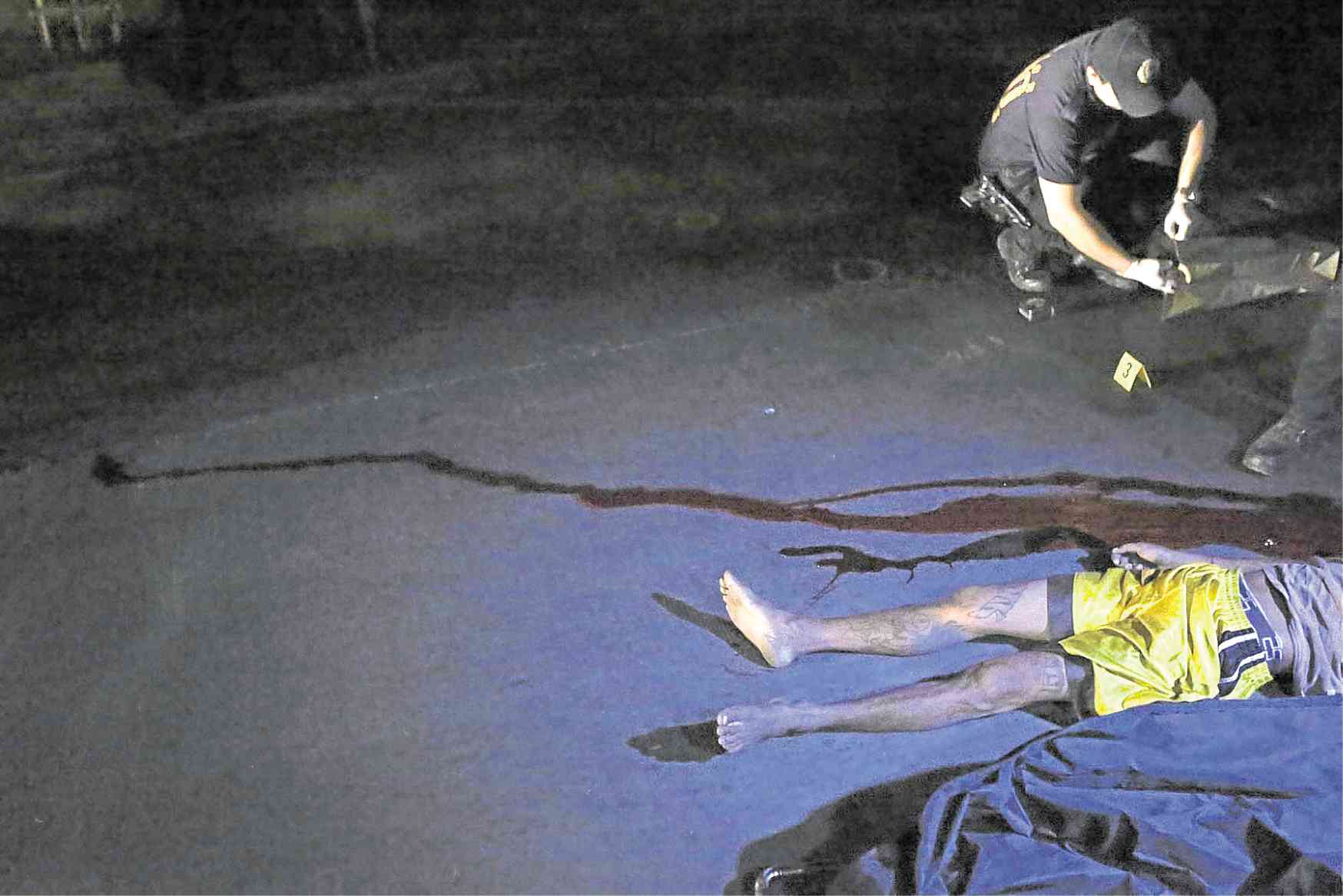 STREET DEATH A drug suspect lies dead on Lapu-Lapu Street in Navotas City after allegedly shooting it out with policemen during an antidrug raid. —INQUIRER PHOTO

The faintest prayer for the dead on All Souls’ Day could belong to those who have nowhere to call as their final resting place—unclaimed corpses of fatalities in the Duterte administration’s war on drugs.

The bodies’ burial had been left to undertakers to decide after no relative came forward to claim the remains.

One of the funeral homes grappling with this phenomenon, magnified by the bloody antidrug campaign of President Duterte, sits in what could be considered ground zero of the war on drugs—Caloocan, Malabon and Navotas known in police lingo as Camanava.

These cities are under the jurisdiction of the Northern Police District (NPD), which has an accredited funeral home that is now groaning under the weight of finding ways to dispose of corpses of drug war fatalities that no one is claiming.

Orly Fernandez, 65, manages Eusebio Funeral Services and has mastered the art of waiting for dead bodies.

An ordinary day for him would be one during which he just slumps on his monobloc chair and waits for corpses to turn up at the funeral parlor’s doors.

On the eve of All Soul’s Day this year, however, the wait has proven to be longer for Fernandez.

Business had not been as brisk as two years ago, when almost nightly police antidrug operations would mean corpses streaming into Eusebio.

Eusebio, tucked in an overpopulated alley of informal settlers and poor families in Malabon, has been a familiar entry in police blotters being the accredited NPD funeral home.

One of its key tasks was to collect dead bodies from streets, dumps or anywhere in Camanava where corpses would lie as a result of police antidrug raids or street executions of drug suspects.

At the height of the killings in 2016, this task would require Fernandez to be awake before sunrise, waiting for police to alert him where to send Eusebio workers to collect bodies.

The economic equation would have been simple for Fernandez—more bodies equals more income.

But he said Eusebio has had more losses than gains in handling corpses of fatalities in the war on drugs.

In October alone, at least eight corpses lay in Eusebio’s storage facilities in Malabon and Bulacan province, according to funeral home records.

This was the average number of unclaimed bodies that Eusebio would have to bury every month.

Ordinances in the Camanava area allowed funeral homes to bury bodies unclaimed for up to 90 days, depending on circumstances.

But burying the unclaimed corpses entails expenses on the part of Eusebio especially because the funeral home, unlike others, does not want to practice mass burial where the dead’s graves would have no distinguishing mark other than probably a cross.

Eusebio, Fernandez said, looks for bargain slots for tombs like at the Navotas Public Cemetery where graves are built atop each other condominium-style because of lack of space.

To Fernandez, who has been working in the funeral service industry for 45 years, all corpses look alike, including those of victims of summary executions linked to the war on drugs.

“Seeing a dead body for the first time sure gave me the creeps,” he said. “But I got used to it.” 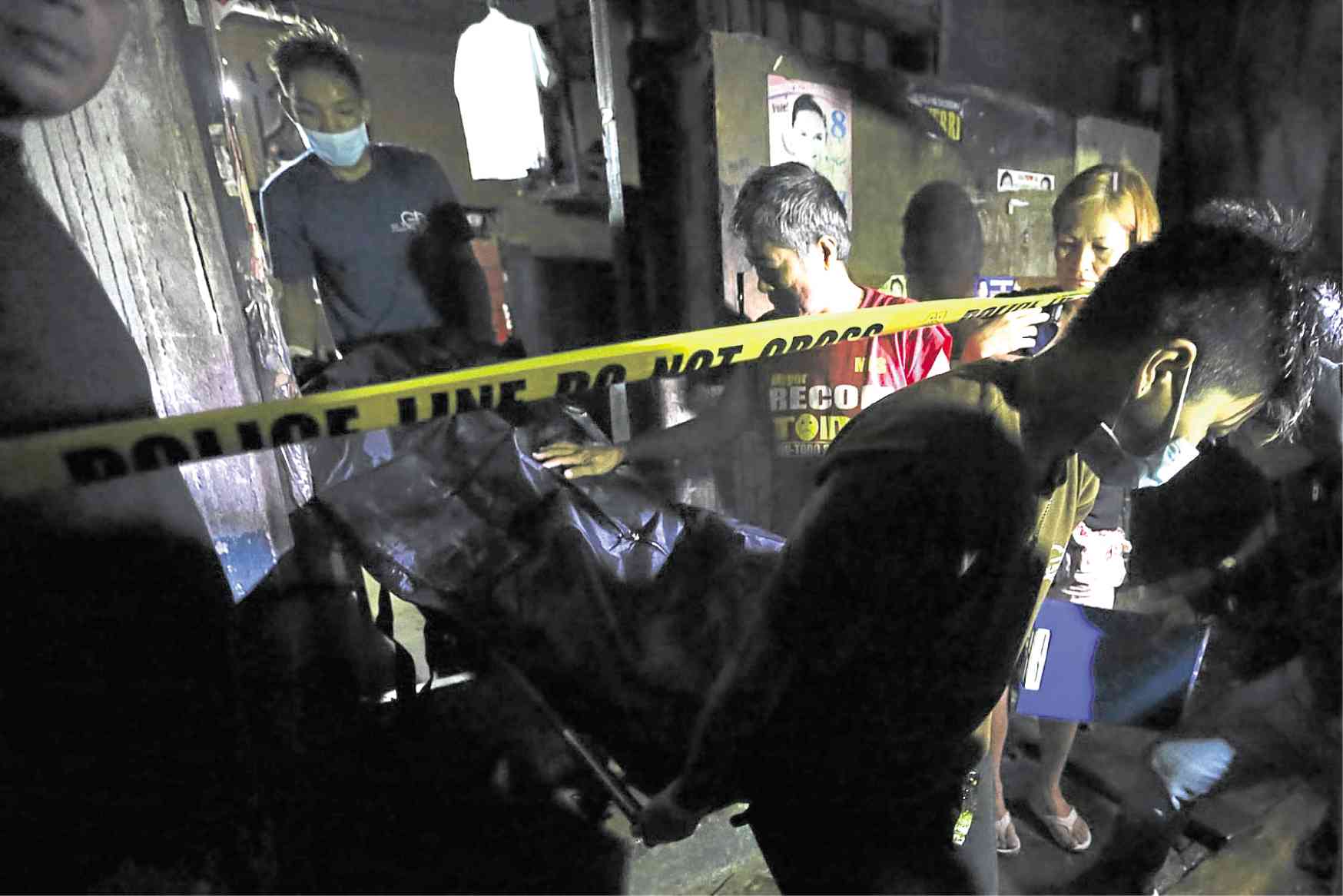 UNSAFE HOME Coroners bring out the body of a suspected pusher who was killed at home during an antidrug operation in Caloocan City. —INQUIRER PHOTO

Too poor for burial

What moves him, according to Fernandez, are instances when families could not afford decent burial for their loved ones, be they victims of summary killings or those who died of natural causes.

Eusebio’s funeral package appeared to have been designed for its main market—the poor in the community which the funeral parlor calls home.

Burial packages for victims of violence, like those killed extrajudicially, cost higher—P28,000 to P35,000.

But for those living in stark poverty, Eusebio’s rates were still beyond reach, according to Fernandez.

“Just last year, a widow of an EJK  victim from Navotas exhausted all means to pay the P50,000 claiming fee of her husband’s body in another funeral home,” Fernandez said, recalling one case of a poor family trying to give a decent burial to a drug war fatality.

“Her son died right after by EJK as well and the police brought him to us,” Fernandez said.

“Although we charge less, she couldn’t pay for her son’s body anymore,” he added.

The widow’s son became one of the unclaimed bodies that were buried by Fernandez and his men.

Aside from the killings appearing to ease, Eusebio’s income was also being hurt by strategies being employed by other funeral homes to make police tap them for corpse retrieval.

According to Fernandez, Eusebio used to service seven to 10 drug war fatalities in a month about two years ago.

Police, he said, would sometimes choose another funeral parlor that offered a higher commission of up to P7,000 per body.

Part of the reason some corpses lay unclaimed was that some funeral parlors charge relatives P10,000 to P15,000 for claiming the bodies.

But in the community being served by Eusebio, the amounts were excessive, Fernandez said.

“People in this area are so poor, how could they even afford that?” he added.

In some cases, police would ask Eusebio to collect the corpse of an unidentified person killed in the street and who has no known relative to pay for funeral.

“Sometimes, we would have to turn them down,” Fernandez said.

“This is still business, after all,” he said.

Despite suffering losses from handling corpses of summary killing victims, Fernandez said Eusebio would continue to give decent burial to the dead—be it a corpse claimed or unclaimed by relatives.

“The dead deserves to be buried with a little dignity,” Fernandez said.