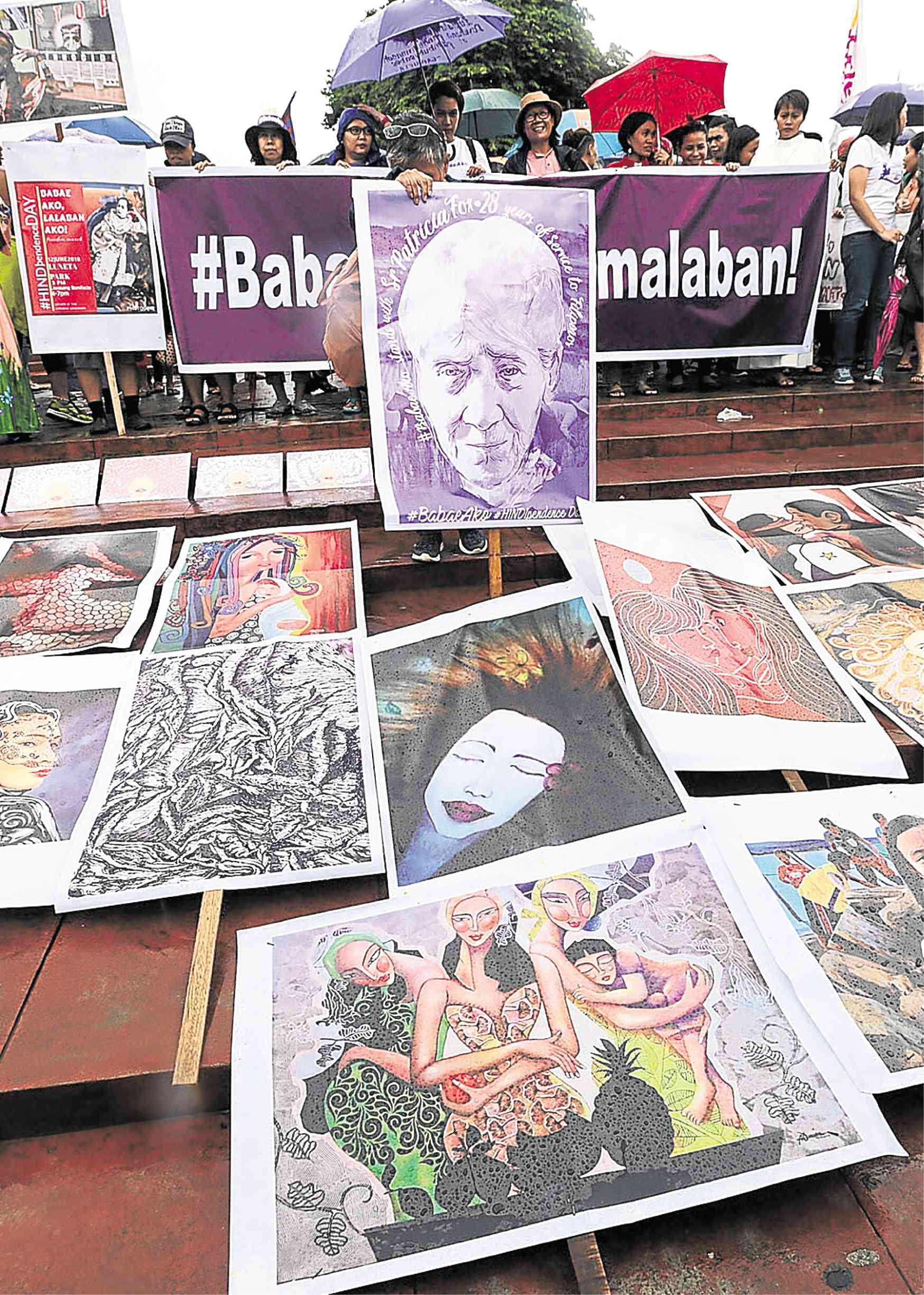 FIGHTING FOR DIGNITY Women activists gather at Rizal Park in Manila on June 12, for a rally denouncing President Duterte’s supposedly low regard for women. —GRIG MONTEGRANDE

At least 56 policemen were involved in over 30 cases of violence against women since President Duterte took office, according to a study by a research institution for women.

The Center for Women’s Resources (CWR) said of 33 cases of violence on women, 12 were drug-related, which meant the victims were either drug suspects or their relatives or were assaulted during antidrug operations.

The report came on the heels of the case of PO1 Eduardo Valencia of the Manila Police District (MPD), who was recently accused of raping a 15-year-old daughter of a drug suspect in exchange for her parents’ freedom.

In a statement, CWR said it was not the first accusation hurled against the MPD.

It cited a report from an 11-year-old girl from Sampaloc, Manila, who was allegedly harassed by four policemen during a drug operation in March.

The suspects were said to be members of the station’s drug enforcement unit, where Valencia was also assigned.

“Disturbingly, the culture of impunity is more rampant,” Guan said.

“Abuses against women continue because these scalawags are able to get away with it,” Guan added.

CWR said of the 33 cases that it had documented, 13 involved victims who were 17 years old and below.

The abuses ranged from catcalling, physical assault, acts of lasciviousness and rape.

Almost half of the cases documented by CWR were rape, while seven were acts of lasciviousness.

CWR said it found only one case of a policeman being dismissed from service for involvement in violence against women.

This was the case of six police officers who raped a detainee charged with drug possession in Olongapo City.

Other cases have not been pursued, while most police officers involved in abuses of women had either been just relieved or transferred to a different police station.

Valencia has been charged criminally and administratively and thrown behind bars.

Guan said CWR was demanding a list of policemen involved in abuses of women and minors and updates of investigation being done.

The Duterte administration has been criticized for Mr. Duterte’s often disparaging remarks against women.

At one time, the President said the most effective way to deal with female communist rebels should be to shoot them in the vagina.

During his campaign for the presidency, President Duterte said on stage that he regretted not being the first to rape an Australian missionary during a hostage crisis in Davao City when he was still mayor.

One of his most recent comments about women was his preference for male soldiers because female soldiers would have problems peeing in the battlefield.