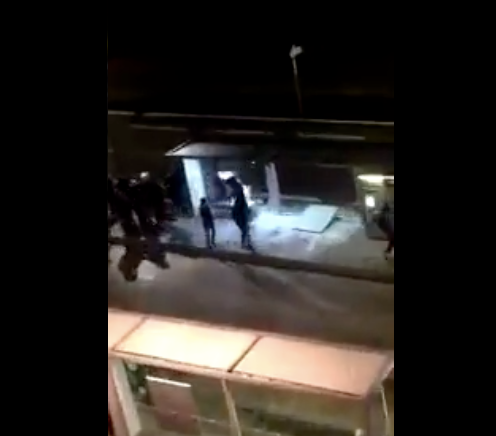 Image: Screengrab from Twitter/@djam____ via Storyful

A gang of young men destroyed bus stops and launched projectiles at trams in Borny, a neighborhood of Metz, France as part of a Halloween “Purge” yesterday, Oct. 31, as per France Bleu Lorraine report on the same day.

A video uploaded by elfo (@djam____) shows a group unidentified figures roaming through the streets and smashing the glass at stops along the tram line on Boulevard de Provence in Borny yesterday night.

One individual throws what appears to be a firework at passing trams.

This violence comes after a 19-year-old was arrested Monday, Oct. 29, for calling for a “purge” against police officers throughout France. The call spread through social networks and has led to violence in multiple French cities.

A bottle of acid was thrown at a police officer in Essonne, as reported by Le Parisien today. Other disturbances have been reported in Lyon.

The call for a “purge” is inspired by the United States horror franchise “The Purge” which is about a dystopian future that holds an annual 12-hour period wherein violence is legal. KM

Business as usual at BOC despite Duterte-ordered purge