UP hits ‘deceptive’ group over campus rally with Mocha Uson 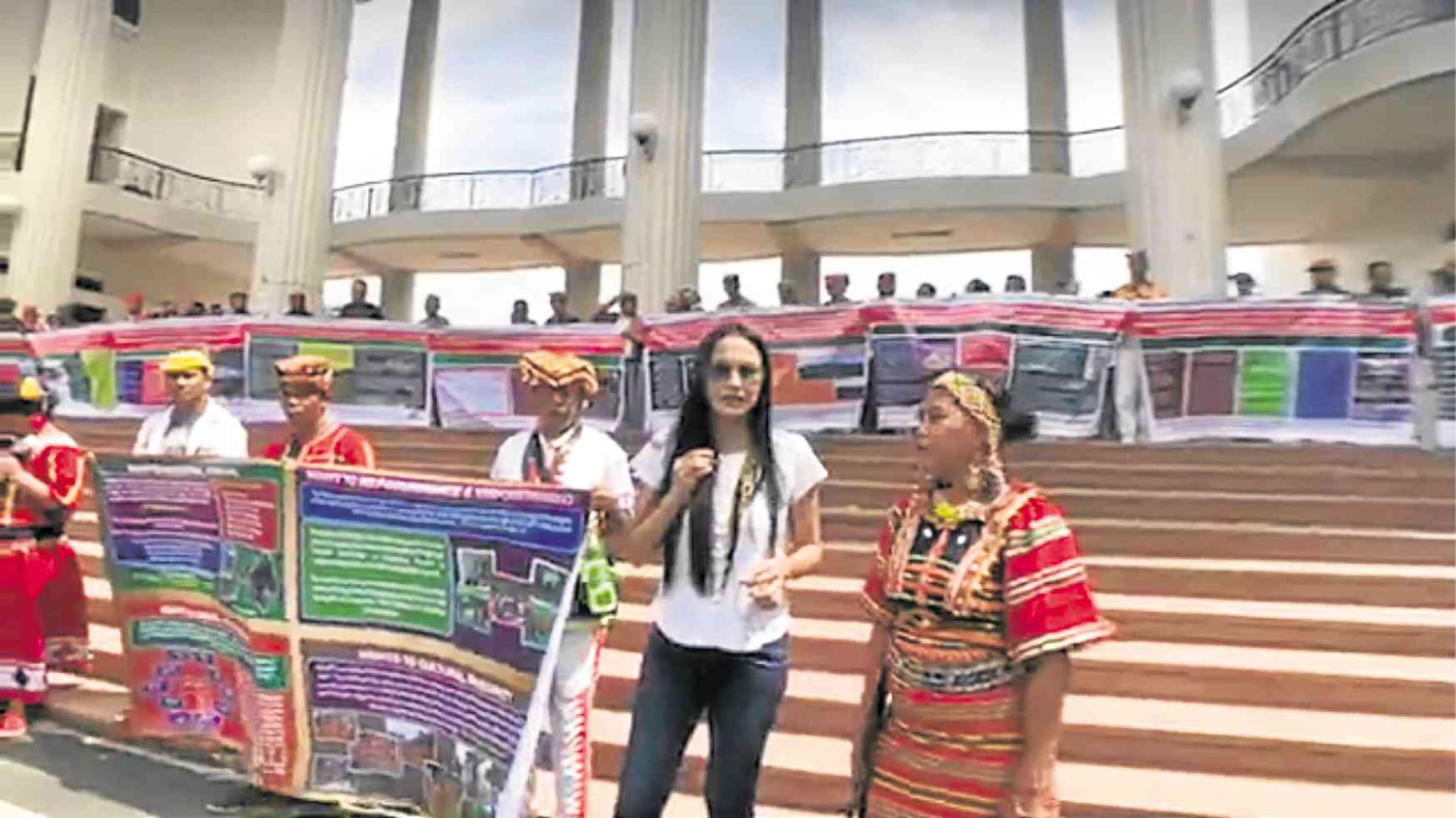 ‘LUMAD’ ON HER MIND Before they were stopped by the police for lacking a permit to hold a “cultural presentation,” a group that included former presidential communications assistant secretary and now congressional aspirant Mocha Uson (in white) managed to stage a 30-minute rally outside Quezon Hall at UP Diliman on Monday. —VIDEOGRAB FROM USON’S FACEBOOK PAGE

Officials of the University of the Philippines (UP) Diliman said they were caught off-guard by the unauthorized rally held on campus on Monday by a group that turned out to be identified with former assistant secretary and now congressional aspirant Mocha Uson.

According to UP officials interviewed by the Inquirer on Wednesday, the group, who claimed to represent lumad or indigenous peoples (IP), handed over a letter earlier that day requesting permission to hold a “cultural presentation” outside Quezon Hall, which houses key administrative offices and is located right behind the Oblation statue.

But not only did the group proceed with their activity without UP’s approval. It also had Uson present and “interviewing” the ralliers — something that was not disclosed in the letter — while expressing support for President Rodrigo Duterte and condemning the “atrocities” committed by communist rebels against IP communities.

A video of the 30-minute rally was broadcast live on the Facebook page of Uson, a former Palace communications official who, after figuring in a spate of controversies over her social media behavior, resigned on Oct. 3.

A former sexy performer who has been a staunch defender of President Duterte, she is now seeking a House seat as a party-list representative.

Five to seven individuals representing the group showed up in traditional lumad attire early Monday morning to handcarry their request letter to the office of Vice Chancellor for Community Affairs Ernie Lope.

Based on the letter, the group called itself the Alliance for Truth, Integrity and Nationalism, with Ricardo Penson as its chairperson.

“They told me they needed to perform a cultural presentation at 10 a.m., with students as their targeted audience,” Lope told the Inquirer. “But we don’t have classes on Mondays, except for graduate classes.”

Lope explained that he turned down the request for two reasons: The group’s plan to use a “special location” still required the chancellor’s approval, and that the activity would not achieve its purpose since its target audience — the students — were not on campus that day.

Told of the denied request, the group then sought permission to just walk around the Academic Oval, which Lope said it could freely do.

But about 5 minutes later, Lope saw the group assembled outside Quezon Hall and their activity being broadcast on Uson’s Facebook page.

“It’s saddening that they did not divulge the true intention of their use of the school grounds,” he said.

UP Chancellor Michael Tan called out the group for being “deceptive” in the letter. “In their request, they said it was going to be a cultural program.”

During the rally, the group said it wanted to show UP students who the “legitimate” lumad were and that they were united in supporting President Duterte, who they said had “the biggest heart” for indigenous peoples compared to past presidents.

Interviewed by Uson, they also accused the communist New People’s Army of killing lumad villagers and stealing their ancestral lands.

Lope said the group would not be facing sanctions as its members peacefully dispersed after the activity was stopped by the UP Diliman police.

The UP Diliman University Student Council assailed what the group did, calling it a form of “Red-tagging” that could imperil legitimate lumad organizations.

“There is no place in UP for the likes of Mocha Uson, who is a known defender of Duterte’s dictatorship that continue to endanger the lumad in their struggle for their ancestral lands, selfdetermination and education,” the council said in a statement.