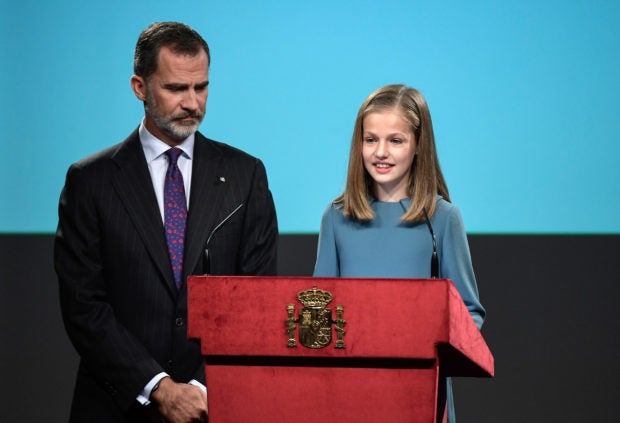 Spanish heiress of the throne, princess Leonor (R), reads the Spanish Constitution under the eyes of his father king Felipe VI, during a ceremony marking 40 years of its approval by the parliament, at the Cervantes Institute in Madrid, on October 31, 2018. (Photo by OSCAR DEL POZO / AFP)

MADRID — The heir to the Spanish throne, 13-year-old Princess Leonor, has made her first public address at an official event marking the 40th anniversary of Spain’s Constitution.

Leonor de Borbon, the elder of two daughters of King Felipe VI and Queen Letizia, read out the first of 169 articles of Spain’s Carta Magna, which was approved by the Spanish Parliament on October 31, 1978.

King Felipe read the law’s preamble and was then joined on stage by his daughter at the Cervantes Institute in Madrid.

With a firm voice, Leonor read the article, which states that Spain follows the political system of a parliamentary monarchy.

Felipe was also 13 when he read his first speech publicly in 1981. /kga