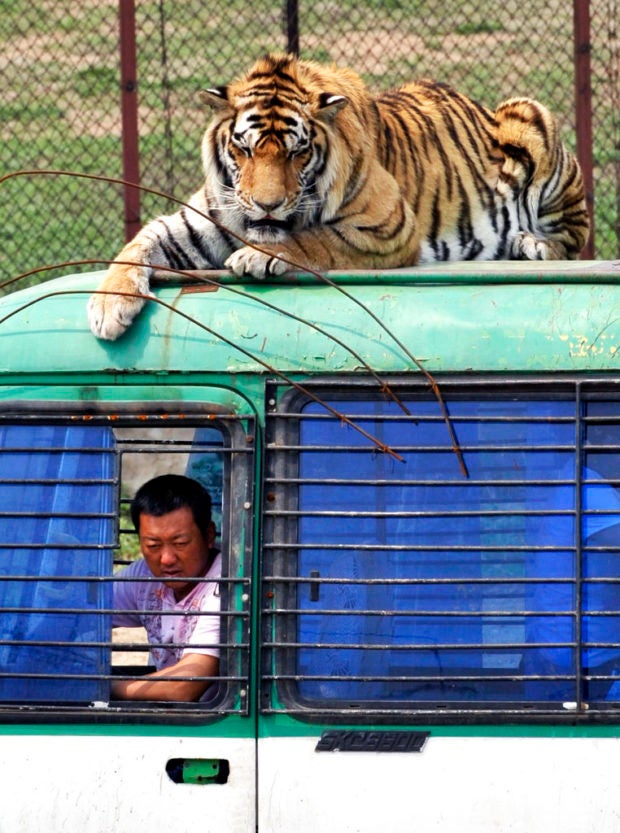 In this May 7, 2009 photo, a Siberian tiger crouches on top of a tourist bus at a branch of Harbin Siberian Tigers Breeding Center in Shenyang in northeast China’s Liaoning province. China says it will allow trading in products made from endangered tigers and rhinos under “special circumstances,” reversing a previous ban and bringing condemnation from conservation groups. A notice from the Cabinet issued Monday, Oct. 29, 2018, avoided mentioning any change in the law, saying instead that it would “control” the trade and that rhino horns and tiger bones could only be obtained from farmed animals for use in “medical research or in healing.” (Chinatopix Via AP, File)

BEIJING — China said it will allow trading in products made from endangered tigers and rhinos under “special circumstances,” reversing a previous ban and bringing condemnation from conservation groups.

A notice from the Cabinet issued Monday avoided mentioning any change in the law, saying instead that it would “control” the trade and that rhino horns and tiger bones could only be obtained from farmed animals for use in “medical research or in healing.”

“Under the special circumstances, regulation on the sales and use of these products will be strengthened, and any related actions will be authorized, and the trade volume will be strictly controlled,” the statement said.

Tiger bone and rhino horn are used in traditional Chinese medicine, despite a lack of evidence of their effectiveness in treating illness and the effect on wild populations.

Chinese demand for ivory is also blamed as a driver behind the slaughter of African elephants, despite Beijing banning all trade in ivory starting from this year.

No reason was given for the lifting of the ban, which was implemented in 1993 amid a global push to protect fast-disappearing endangered species.

The statement also said nothing about regulating the farming of tigers and rhinos, but added that the central government “urged governments at all levels to improve publicity activities for protecting rhinos and tigers to help the public actively boycott any illegal purchases.”

The World Wildlife Fund (WWF) said the move to overturn the ban would have “devastating consequences globally” by allowing poachers and smugglers to hide behind legalized trade.

“With wild tiger and rhino populations at such low levels and facing numerous threats, legalized trade in their parts is simply too great a gamble for China to take,” Margaret Kinnaird, WWF wildlife practice leader, was quoted as saying in a statement from the Washington-based organization.

“This decision seems to contradict the leadership China has shown recently in tackling the illegal wildlife trade,” Kinnaird said.

Despite the former ban, China has long allowed tiger farms, which harvest the bones of dead animals, and tacitly allows their sale for alleged medicinal purposes, according to a study by the Environmental Investigation Agency (EIA), a British nonprofit.

Operators are also believed to be investigating the possibility of farming rhinos in the country, although, unlike tigers, those are not native to China.

The EIA called the overturning of the ban a “brazen and regressive move which drastically undermines international efforts for tiger and rhino conservation.”

“At a single stroke, China has shattered its reputation as a growing leader in conservation following its domestic ban on the sale of ivory at the start of the year,” the group said.

An estimated 3,890 tigers remain alive in the wild, according to a report presented during the Third Asia Ministerial Conference on Tiger Conservation in 2016. Thousands of tigers are also believed to have been bred on Chinese farms where conditions for the animals are often criticized as dire.

Studies put the population of wild rhinos at less than 30,000, while poaching is reducing that number drastically each year.

Humane Society International also criticized China’s move, saying that “the trade it engenders will inevitably increase pressure on animals in the wild.”

“With this announcement, the Chinese government has signed a death warrant for imperiled rhinos and tigers in the wild who already face myriad threats to their survival,” Iris Ho, the group’s senior specialist for wildlife program and policy, was quoted as saying in a statement.

“It sets up what is essentially a laundering scheme for illegal tiger bone and rhino horn to enter the marketplace and further perpetuate the demand for these animal parts,” Ho said.  /kga