Tugboats and other vessels from state-owned oil company Pertamina which were near the crash site and first at the scene, found aircraft debris in the waters but no survivors yet.

There were 189 people on board the plane.

Local authorities confirmed that flight JT610 departed the airport near the capital Jakarta on schedule at 6.20am local time, but lost contact with air traffic controllers about 13 minutes later.

READ: Indonesia Lion Air flight with 189 on board crashes into sea

The Boeing 737 MAX, one of the latest variations of the American-built aircraft, was originally scheduled to arrive at Pangkal Pinang, in Bangka Belitung Islands province, at 7:20 a.m. local time.

Indonesia’s national search and rescue agency Basarnas chief Muhammad Syaugi said his agency was alerted to the incident at about 6:50 a.m. and immediately dispatched resources to the possible crash site.

“When we arrived at the location, we found aircraft debris, a buoy, cellphones, and several objects,” said Air Marshal Syaugi at a joint press conference on Monday morning with Indonesia’s national transportation safety committee KNKT. 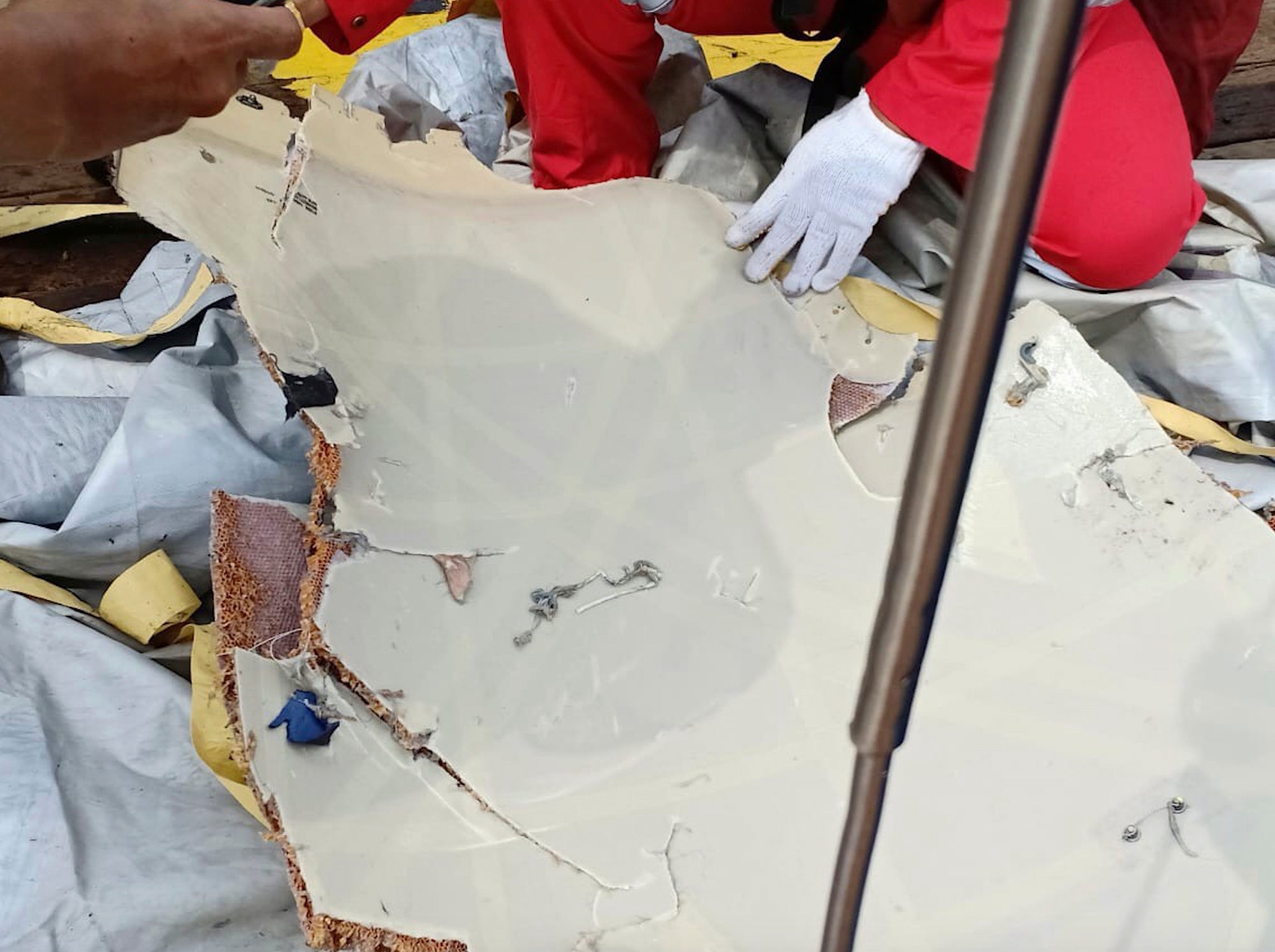 In this photo released by Indonesian Disaster Mitigation Agency (BNPB) a rescuer inspects debris believed to be from Lion Air passenger jet that crashed off West Java on Monday, Oct. 29, 2018. A Lion Air flight crashed into the sea just minutes after taking off from Indonesia’s capital on Monday in a blow to the country’s aviation safety record after the lifting of bans on its airlines by the European Union and U.S. (BNPB via AP)

He added that the location of the crash site is about two nautical miles from where it lost contact with air traffic control and that the aircraft is likely to have sunk to a depth of about 30 to 35 metres underwater.

“We are there already, our vessels, our helicopter is hovering above the waters, to assist,” he said.

“We are still trying to dive to search for the plane,” said Air Marshal Syaugi.

According to the Ministry of Transportation’s directorate general for air travel, flight JT610 had requested to return to Soekarno-Hatta airport before it disappeared from the radar.

When asked on the cause of the crash, KNKT chief Soerjanto Tjahjono said: “We can’t presume anything before finding the blackbox and also the recording from the (air traffic control) tower.”

The weather at the time of the crash was clear. According to Jakarta-based Elshinta radio, a tugboat had notified the Tanjung Priok Port that it spotted a plane crashing into the water on Monday morning.

The 189 onboard the aircraft comprised the two pilots, six flight attendants, 181 passengers including a child and two infants. Around 20 staff members from Indonesia’s Ministry of Finance were also on the flight. 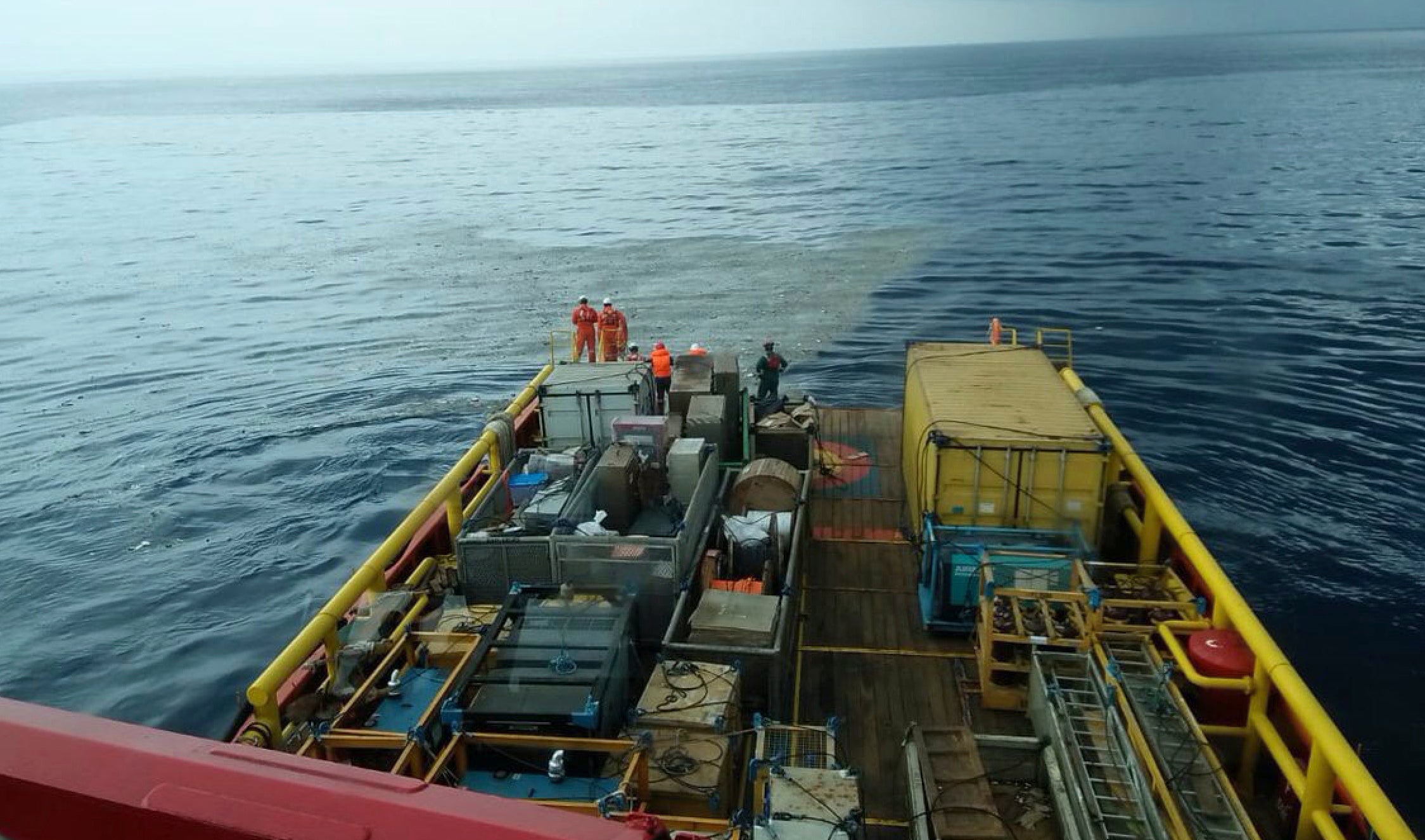 In this photo released by Indonesian Disaster Mitigation Agency (BNPB) rescuers inspect oi slick debris believed to be from Lion Air passenger jet that crashed off West Java on Monday, Oct. 29, 2018. A Lion Air flight crashed into the sea just minutes after taking off from Indonesia’s capital on Monday in a blow to the country’s aviation safety record after the lifting of bans on its airlines by the European Union and U.S. (BNPB via AP)

Lion Air has set up a crisis centre at Soekarno-Hatta airport’s Terminal 1 to assist family members of passengers.

A spokesman from the airline said the Boeing 737 MAX plane was manufactured in 2018 and has been operated by Lion Air since Aug 15.

The aircraft was commanded by Captain Bhavye Suneja, with co-pilot Harvino, who like many Indonesians go by just one name. The spokesman added Capt Bhavya has clocked more than 6,000 flight hours, while his co-pilot has more than 5,000 flight hours.

Lion Air is Indonesia’s largest low-cost carrier, dominating more than 40 per cent of the market. It has been on an aggressive expansion plan in recent years, including putting in an order for 50 of the Boeing 737 MAX single-aisle planes.

In total, the airline has almost 300 aircraft, more than half of which are from Boeing. Last year, it served nearly 51 million passengers, six million more than in 2016.

But Lion Air also has a history of accidents dating back to 2002, less than three years after it was founded by Indonesian brothers Rusdi and Kusnan Kirana.

In January 2002, a Boeing 737-200 it operated crashed on take-off at Sultan Syarif Kasim II International Airport in Pekanbaru, in Riau province.

The passengers on that flight survived but a crash in Solo two years later in 2004 had claimed the lives of 25 people in what had remained as the airline’s only incident with fatalities until Monday’s crash.

There were also other accidents involving its aircraft, include an incident in August 2013, when a Lion Air Boeing 737-800 from Makassar to Gorontalo with 117 passengers and crew on board, hit a cow while landing at Jalaluddin Airport and veered off the runway.

That same year, one of its aircraft also crash-landed in the water after it overran the runway at the Ngurah Rai airport in Bali.

The latest crash comes after the tragic December 2014 crash of AirAsia Indonesia flight QZ8501 into the Java Sea after taking off from Surabaya. The flight to Singapore was carrying 162 people.

Read Next
With ‘Undas’ traffic, PAL urges passengers to arrive early at airports
EDITORS' PICK
Duterte: Authorities may take over hotels, but it’s not a ‘remedy’ in a democracy
When will PH get enough COVID-19 vaccines? ‘I really don’t know,’ Duterte says
Smart introduces Smart Barkada with the launch of Double GIGA
LT Group, Inc. Notice of Annual Shareholders’ Meeting 2/2
Duterte defends govt’s efforts vs COVID in 2020
Smart is fastest 5G Network in PH – Ookla
MOST READ
‘Duterte a total failure as leader. He must step down’ – group
Duterte ‘privately’ dealing with China invasion in West PH Sea – Palace
Ramon Tulfo says gov’t running PH like a ‘headless chicken’
Stop acting like a colonizer, PH business groups tell China
Don't miss out on the latest news and information.