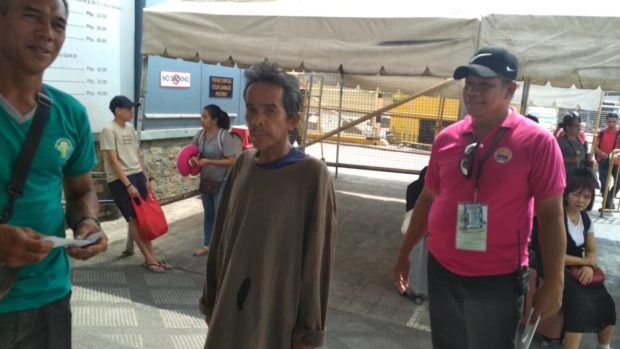 Scavenger Ceferino Angco after he was rescued from the waters off Talisay City on Monday. Gerard Francisco/Cebu Daily News

CEBU CITY — Ceferino Angco, 47, wanted to visit the graves of his family and relatives in Carmen town, Bohol province, on All Saints’ Day but did not have money for a boat ride.

A determined Angco decided instead to swim his way home late on Saturday night. But he was unable to go far.

Members of the local Bantay Dagat (sea patrol) saw Angco hanging on to a floating piece of Styrofoam at 8 a.m. on Sunday, and pulled him out of the waters off Talisay City.

A scavenger in Cebu, Angco said he could not afford to buy a ticket for the ride home to Bohol.

So he decided to swim and cross Cebu Strait, which separates the islands of Cebu and Bohol.

A fast craft ride from Cebu City to Bohol costs between P250 and P500, and takes about two hours of travel.

“I am embarrassed to ask money for fare,” Angco said.

So he started swimming from the vicinity of Malacañang sa Sugbo in Cebu City around 11 p.m. on Saturday.

Just a few meters after, fatigue started to set in. Angco then clung to a Styrofoam to stay afloat.

He was in the water for nine hours until he was rescued by Felix Angco (no relation) and other members of Bantay Dagat.

“He said it was better that he would just swim to Bohol than commit a crime. He was hoping someone would see him and take pity on him,” Felix said.

Talisay Councilor Antonio Bacaltos Jr. on Monday bought Angco a ticket for a fast craft so he could go home to Bohol.

Read Next
Search and rescue efforts underway for crashed Lion Air plane
EDITORS' PICK
So: I lacked connections to succeed in PH ‘culture’
Every Filipino home can now be a smart home with realme TechLife
Giant clams worth P160M seized in Palawan raid
New variants suspected in surge of Covid-19 cases
Smart reinforces superiority with best speed and mobile video experience in PH
Nestlé Philippines’ ‘NESCAFÉ Plan’ bags Grand Anvil at PRSP 56th Anvil Awards
MOST READ
How to lose a Filipino genius: Wesley So officially a US citizen
So: I lacked connections to succeed in PH ‘culture’
US lays out list of aid to ‘satisfy’ Duterte following VFA payment demand
Rights lawyer survives attack by playing dead, loses all case files
Don't miss out on the latest news and information.

Andrea on why she wouldn’t take an ex back; Baron on being a recovering alcoholic